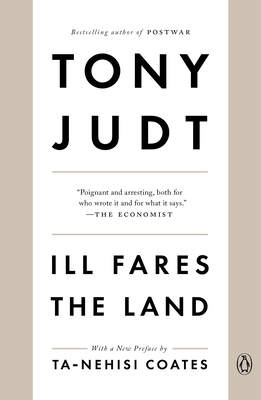 A gift to the next generation of engaged citizens, from one of our most celebrated intellectuals.

As the economic collapse of 2008 made clear, the social contract that defined postwar life in Europe and America-the guarantee of security, stability, and fairness-is no longer guaranteed; in fact, it's no longer part of the common discourse. Tony Judt, one of our leading historians and thinkers, offers the language we need to address our common needs, rejecting the nihilistic individualism of the far Right and the debunked socialism of the past. In reintroducing alternatives to the status quo, Judt invigorates our political conversation, furnishing the tools necessary to imagine a new form of governance and a better way of life.

Tony Judt was the Erich Maria Remarque Professor of European Studies at New York University, as well as the founder and director of the Remarque Institute, dedicated to creating an ongoing conversation between Europe and the United States. He was educated at King’s College, Cambridge, and the École Normale Supérieure, Paris, and also taught at Cambridge, Oxford, and Berkeley. Professor Judt was a frequent contributor to The New York Review of Books, The Times Literary Supplement, The New Republic, The New York Times, and many journals across Europe and the United States. He is the author or editor of fifteen books, including Thinking the Twentieth Century, The Memory Chalet, Ill Fares the Land, Reappraisals: Reflections on the Forgotten Twentieth Century, and Postwar: A History of Europe Since 1945, which was one of The New York Times Book Review’s Ten Best Books of 2005, the winner of the Council on Foreign Relations Arthur Ross Book Award, and a finalist for the Pulitzer Prize. He died in August 2010 at the age of sixty-two.
Loading...
or
Not Currently Available for Direct Purchase