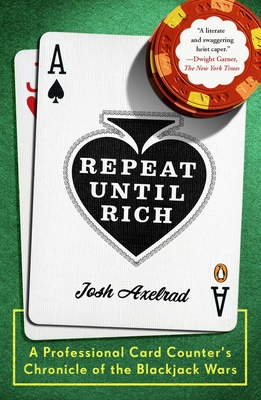 A Professional Card Counter's Chronicle of the Blackjack Wars

A deliciously wry, edge-of-your-seat memoir about making a fortune from counting cards.

Filled with actual bad guys, chase scenes, and high stakes, Repeat Until Rich is an intoxicating, unprecedented view of the dangerous allure of living off the cards and by one's wits. At twenty-four, Josh Axelrad held down a respectable but dull job on Wall Street. Then one night, a stranger at a cocktail party persuaded him to leave the nine- to-five behind and pursue an unlikely dream: the jackpot. Taut, atmospheric, and written with clarity and wit, Repeat Until Rich presents a darkly hilarious account of ditching the mundane and entering the alternative universe of professional blackjack-with all its intrigue, adventure, and cash.

Josh Axelrad played blackjack professionally for five years and poker unprofessionally for one. A graduate of Columbia College, he languished briefly in investment banking before he turned to cards. His personal win as a card counter, at $700,000, has left him eighty-sixed from the finest casinos in Vegas and around the United States. His subsequent losses at poker (exceeding $50,000) have cost him credit privileges at the Internet’s most reputable poker rooms. A commentator on the casino industry for National Public Radio’s Marketplace program, Axelrad also performs at Stories at the Moth in New York and has been featured on the award-winning Moth Podcast.
Loading...
or
Not Currently Available for Direct Purchase