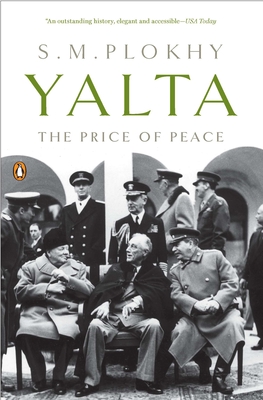 Imagine you could eavesdrop on a dinner party with three of the most fascinating historical figures of all time. In this landmark book, a gifted Harvard historian puts you in the room with Churchill, Stalin, and Roosevelt as they meet at a climactic turning point in the war to hash out the terms of the peace. The ink wasn't dry when the recriminations began. The conservatives who hated Roosevelt's New Deal accused him of selling out. Was he too sick? Did he give too much in exchange for Stalin's promise to join the war against Japan? Could he have done better in Eastern Europe? Both Left and Right would blame Yalta for beginning the Cold War. Plokhy's conclusions, based on unprecedented archival research, are surprising. He goes against conventional wisdom-cemented during the Cold War- and argues that an ailing Roosevelt did better than we think. Much has been made of FDR's handling of the Depression; here we see him as wartime chief. Yalta is authoritative, original, vividly- written narrative history, and is sure to appeal to fans of Margaret MacMillan's bestseller Paris 1919.

Serhii Plokhii (Plokhy) is Mykhailo Hrushevsky professor of Ukrainian history at Harvard University and the author of several award-winning books on Ukrainian and Russian history, including The Cossacks and Religion in Early Modern Ukraine (Oxford, 2001), The Origins of the Slavic Nations: Premodern Identities in Russia, Ukraine and Belarus (Cambridge, 2006), and Ukraine and Russia: Representations of the Past (Toronto, 2008). His revisionist account of the 1945 Yalta conference, Yalta: The Price of Peace was released by Viking Press on 4 February 2010, to mark the 65-th anniversary of the start of the Yalta Conference.

Praise For Yalta: The Price of Peace…

"The end of the Cold War has given scholars a chance to step back and take a more dispassionate look at those eight consequential days in February 1945. It is hard to imagine anyone doing so better than S.M. Plokhy in 'Yalta: The Price of Peace' ... colorful and gripping ..."
-The Wall Street Journal

"Harvard historian S.M. Plokhy has produced a gripping narrative of the eight days in February 1945 when the Big Three - Franklin D. Roosevelt, Winston Churchill, and Joseph Stalin - convened the Yalta summit as World War II raged on."
-The Boston Globe

"This balanced and detailed study is an excellent source for understanding the last 65 years of U.S. and European history."
-BookPage

"An astute reappraisal of the Yalta Conference...Fresh research drives this scholarly study of the complex blend of Yalta's personalities and ideas."
-Kirkus

"In this insightful new book, S.M. Plokhy takes on perhaps the most controversial and least understood summit of modern times, clarifying, with new documents from the Soviet side, what is myth and what is reality. The Big Three come to life in Plokhy's telling, and the analysis is sober and strong."
-Jon Meacham, Pulitzer Prize-winning author of American Lion and Franklin and Winston

"S.M. Plokhy's Yalta provides an important and timely corrective to the myths that have lasted far too long. His detailed and balanced account should do much to correct the misunderstandings and distortions."
-Antony Beevor, prize-winning author of Stalingrad and The Fall of Berlin

"A genuinely enlightening book, not only about the history of Yalta and the roles played there by Stalin, FDR, and Churchill, but also about the geopolitics of tomorrow: while reading the book, simply replace Stalin with someone whose name rhymes with his, and Poland with Ukraine."
-Zbigniew Brzezinski, former National Security Advisor and author of America and the World and Second Chances

"Richly detailed and meticulously researched, Yalta brilliantly describes the personalities and the politics behind one of the most important, and least understood, political gatherings of the twentieth century."
-Anne Applebaum, Pulitzer Prize-winning author of Gulag and between East and West
or
Not Currently Available for Direct Purchase
Copyright © 2020 American Booksellers Association