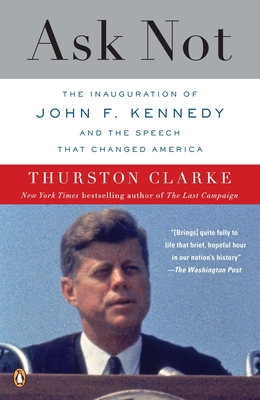 The Inauguration of John F. Kennedy and the Speech That Changed America

2013 is the 50th Anniversary of JFK’s assassination.

A narrative of Kennedy's quest to create a speech that would distill American dreams and empower a new generation, Ask Not is a beautifully detailed account of the inauguration and the weeks preceding it. During a time when America was divided, and its citizens torn by fears of war, John F. Kennedy took office and sought to do more than just reassure the American people. His speech marked the start of a brief, optimistic era. Thurston Clarke's portrait of JFK is balanced, revealing the president at his most dazzlingly charismatic and cunningly pragmatic.

Praise For Ask Not: The Inauguration of John F. Kennedy and the Speech That Changed America…

"A real page-turner… makes for a great and stimulating vacation read… deftly weav[es] together the private, personal, and intimate with the public, the political, and the-then-secret public and political, makes one want to keep reading to find out even more of the scoop."
—Daily Beast

"[A] compelling portrait of one of the towering figures of 20th-cnetury America."
—Christian Science Monitor

"There will be few, if any, contributions more entertaining and informative than Thurston Clarke's comprehensive chronological telling of his last 100 days in office."
—Financial Times

"A fascinating analysis of what was… and what might have been."
—Booklist

"A graceful, bittersweet chronicle… Clarke clearly admires Kennedy but does not ignore his flaws… an absorbing narrative."
—Library Journal

"Camelot devotees will relish insider details, from descriptions of an obviously depressed Vice President Johnson 'growling at anyone who disturbed him' to dismissive jabs at Sen. Barry Goldwater taken from the president’s official diary."
—Publishers Weekly

"Thurston Clarke has done the seemingly impossible: he has found a revealing new angle of vision on John F. Kennedy that brings the president and his times back to vivid life. This is excellent narrative history."
—Jon Meacham, New York Times bestselling author of Thomas Jefferson: The Art of Power

“Clarke makes the drama, the excitement, and the dark side of Camelot seem like only yesterday—indeed, you feel as though you’re right there, in the Kennedy White House, at Hyannis Port, and aboard Air Force One with JFK, today.”
—Strobe Talbott, President, Brookings Institution

"A fascinating, close-up look at the final dramatic months of a young president's life. Thurston Clarke's portrait of Kennedy is masterful in this compelling convergence of history and biography."
—Bob Herbert, Distinguished Senior Fellow at Demos and former Op-Ed Columnist for the New York Times

Thurston Clarke is the author of nine widely acclaimed works of fiction and nonfiction, including California Fault, a New York Times notable book; Equator; By Blood and Fire; Pearl Harbor Ghosts, the basis for the CBS Pearl Harbor documentary; and the bestselling Lost Hero, which was made into an award-winning NBC miniseries about Raoul Wallenberg. He has written for Vanity Fair, Glamour, Outside, Travel Holiday, Condé Nast Traveler, and numerous other magazines and newspapers. He is the recipient of a Guggenheim Fellowship, the Publication Award for the Geographic Society of Chicago, and a Lowell Thomas Award for travel literature. He lives with his wife and three daughters on Lake Champlain in upstate New York.
Loading...
or
Not Currently Available for Direct Purchase