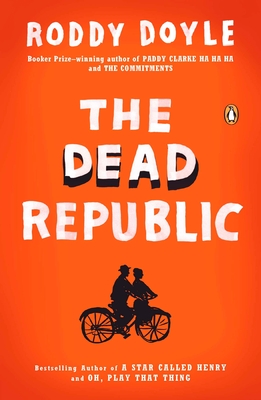 Henry Smart is back. It is 1946, and Henry has crawled into the desert of Utah's Monument Valley to die. He's stumbled onto a film set though, and ends up in Hollywood collaborating with John Ford on a script based on his life. Eventually, Henry finds himself back in Ireland, where he becomes a custodian, and meets up with a woman who may or may not be his long-lost wife. After being injured in a political bombing in Dublin, the secret of his rebel past comes out, and Henry is a national hero. Or are his troubles just beginning? Raucous, colorful, and epic, The Dead Republic is the magnificent final act in the life of one of Doyle's most unforgettable characters.

Roddy Doyle is an internationally bestselling writer. His first three novels—The Commitments, The Snapper, and the 1991 Booker Prize finalist The Van—are known as The Barrytown Trilogy. He is also the author of the novels Paddy Clarke Ha Ha Ha (1993 Booker Prize winner), The Woman Who Walked into Doors, and A Star Called Henry, and a non-fiction book about his parents, Rory & Ita. Doyle has also written for the stage and the screen: the plays Brownbread, War, Guess Who's Coming for the Dinner, and The Woman Who Walked Into Doors; the film adaptations of The Commitments )as co-writer), The Snapper, and The Van; When Brendan Met Trudy (an original screenplay); the four-part television series Family for the BBC; and the television play Hell for Leather. Roddy Doyle has also written the children's books The Giggler Treatment, Rover Saves Christmas, and The Meanwhile Adventures and contributed to a variety of publications including The New Yorker magazine and several anthologies. He lives in Dublin.

Praise For The Dead Republic: A Novel (The Last Roundup #3)…

"The best of Doyle's trilogy . . . he has avoided crowd-pleasing formulas to create an original and amusing octogenarian double agent, composing a thoughtful book about a sometimes thoughtless political process."
--The New York Times Book Review

“The story of Henry’s reintegration into a much changed Ireland is thoroughly absorbing. . . . The plot never stops zipping, but, as the title suggests, there’s a darker picture.”
--The New Yorker
or
Not Currently Available for Direct Purchase
Copyright © 2020 American Booksellers Association