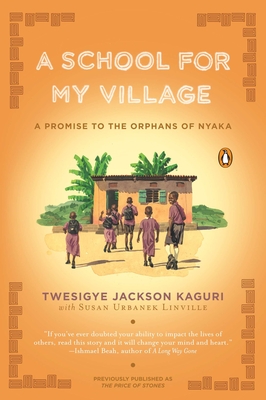 A School for My Village

A Promise to the Orphans of Nyaka

Can one person really make a difference in the world? Twesigye Jackson Kaguri overcame tremendous odds as he followed his dream to build a school for AIDS orphans in his village in Uganda. This is his unforgettable story.

Growing up on his family's small farm, Kaguri worked many hours each day for his taskmaster father, though he was lucky his parents were able to send him to school. Kaguri eventually became a visiting scholar at Columbia University. Returning to his home years later, he was overwhelmed by the plight of AIDS orphans and vowed to build them a tuition-free school. A School for My Village weaves together tales from Kaguri's youth and his inspiring account of building the school and changing the lives of many children.

Twesigye Jackson Kaguri was raised in Uganda, graduated from Makerere University, and was a visiting scholar at Columbia University. He is a director of development at Michigan State University in East Lansing, Michigan State University in East Lansing, Michigan, and the founder and director of the Nyaka and Kutamba AIDS Orphans Schools in Uganda. He has been named a CNN Hero and a Heifer International Hero, and was recently awarded the Waislitz Global Citizen Award by the Global Poverty Project. He splits his time between Michigan and Uganda.
Susan Urbanek Linville, a biologist and writer, lives in Pennsylvania.
Loading...
or
Not Currently Available for Direct Purchase