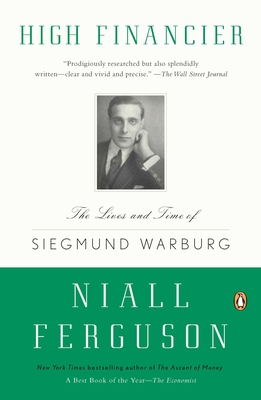 Drawing on more than ten thousand hitherto unavailable letters and diary entries, bestselling author Niall Ferguson tells the story of Siegmund Warburg, a complex man who was as much a psychologist, a politician, and an actor-manager as a banker. An obsessive perfectionist with an aversion to excessive risk, Warburg-and the S. G. Warburg firm-adopted a financial philosophy that was the antithesis of the debt-fueled, algorithm-driven banking of our time. In High Financier, Niall Ferguson recaptures the meticulous business methods and strict ethical code that set Warburg apart from the mere speculators and traders who inhabit today's financial world.

Niall Ferguson is one of the world's most renowned historians. He is the author of Paper and Iron, The House of Rothschild, The Pity of War, The Cash Nexus, Empire, Colossus, The War of the World, The Ascent of Money, High Financier, Civilization, The Great Degeneration, Kissinger, 1923-1968: The Idealist, and The Square and the Tower. He is Senior Fellow at the Hoover Institution, Stanford University, and a Visiting Professor at Tsinghua University, Beijing. His many awards include the Benjamin Franklin Prize for Public Service (2010), the Hayek Prize for Lifetime Achievement (2012) and the Ludwig Erhard Prize for Economic Journalism (2013).
Loading...
or
Not Currently Available for Direct Purchase