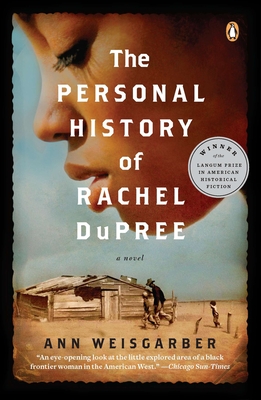 The Personal History of Rachel DuPree

Soon to be a Major Motion Picture Starring Emmy Award Winner and Oscar Nominee Viola Davis; "An eye-opening look at the little-explored area of a black frontier woman in the American West." --Chicago Sun-Times

Praised by Alice Walker and many other bestselling writers, The Personal History of Rachel DuPree is an award-winning debut novel with incredible heart about life on the prairie as it's rarely been seen. Reminiscent of The Color Purple, as well as the frontier novels of Laura Ingalls Wilder and Willa Cather, it opens a window on the little-known history of African American homesteaders and gives voice to an extraordinary heroine who embodies the spirit that built America.

Praise For The Personal History of Rachel DuPree: A Novel…

Ann Weisgarber was longlisted for the Orange Prize, was a finalist for the Orange Award for New Writers, and won the Langum Prize in American Historical Fiction and the Texas Institute of Letters’ Steven Turner Award for Best Work of First Fiction for The Personal History of Rachel DuPree. She holds a master’s degree in sociology and has worked as a social worker and has taught high school and college. Born and raised in Kettering, Ohio, she has also lived in Boston and Des Moines and now divides her time between Sugar Land and Galveston, Texas, the setting of her novel The Promise, about a woman living through the Great Gulf Hurricane of 1900.
Loading...
or
Not Currently Available for Direct Purchase