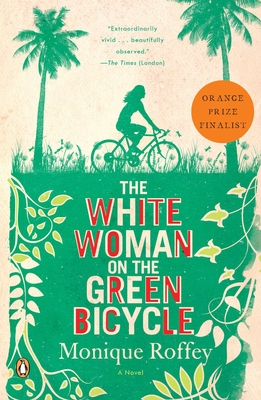 The White Woman on the Green Bicycle

A beautifully written, unforgettable novel of a troubled marriage, set against the lush landscape and political turmoil of Trinidad—by the award-winning author of The Mermaid of Black Conch

Monique Roffey's Orange Prize-shortlisted novel is a gripping portrait of postcolonialism that stands among great works by Caribbean writers like Jamaica Kincaid and Andrea Levy.

When George and Sabine Harwood arrive in Trinidad from England, George is immediately seduced by the beguiling island, while Sabine feels isolated, heat-fatigued, and ill-at-ease. As they adapt to new circumstances, their marriage endures for better or worse, despite growing political unrest and racial tensions that affect their daily lives. But when George finds a cache of letters that Sabine has hidden from him, the discovery sets off a devastating series of consequences as other secrets begin to emerge.

Praise For The White Woman on the Green Bicycle: A Novel…

"Engaging. . . . A firebomb of a book, revealing a slowly disintegrating marriage, a country betrayed and a searing racism that erupts in terrible violence. . . . This is a stunning book, and its depiction of an aspect of Caribbean life is well worth contemplating."
—The Cleveland Plain Dealer

"Roffey's explorations of longtime marriages, race, and the lingering effects of colonialism are insightful and often painful to read. . . . The true main character in this novel is Trinidad itself: its people, its customs, and its contradictions."
—Nancy Pearl, NPR

"Few novels capture the postcolonial culture with such searing honesty as this Caribbean story told through the alternating viewpoints of a white British couple over the last 50 years. . . . The pitch-perfect voices capture the colonials' racism and sense of entitlement."
—Booklist

"A rich and highly engaging novel."
—The Guardian

"Heart-rending and thought-provoking, you will never again see the Caribbean as just another holiday destination."
—Elle

"Equal love and attention go into the marriage and the country at the heart of this Orange Prize short-listed novel. . . . It's a book packed with meaty themes, from racism to corruption to passion and loyalty."
—Seven, The Sunday Telegraph

"Roffey's Orange Prize nominated book is a brilliant, brutal study of a marriage overcast by too much mutual compromise."
—The Independent

“A searing account of the bitter disappointment suffered by Trinidadians on securing their independence from British colonial rule and of the mixed feelings felt by a white couple who decide to stay on. An earthy, full-blooded piece of writing, steaming with West Indian heat.”
—The London Evening Standard

“Her plot engages the reader through a gradual revelation of the past – slowly forming a melancholy whole.”
—Financial Times

“The White Woman on the Green Bicycle is a love story wrapped in Trinidad’s political drama.  Secrets from a decades-long relationship are revealed as the husband reads his wife’s undelivered letters to Eric Williams, the charismatic leader of the island nation in its infancy.”
—Pride Magazine

Monique Roffey was born in Port of Spain, Trinidad, and educated in the UK. Since then she has worked as a center director for the Arvon foundation and has held the post of Royal Literary Fund Fellow at Sussex, Chichester, and Greenwich universities. She is the author of the highly acclaimed novels sun dog and Archipelago, which is a finalist for the 2013 OCM Bocas Prize for Caribbean Literature. She has also written a memoir, With the Kisses of His Mouth. Read more about her writing at www.moniqueroffey.co.uk.
Loading...
or
Not Currently Available for Direct Purchase