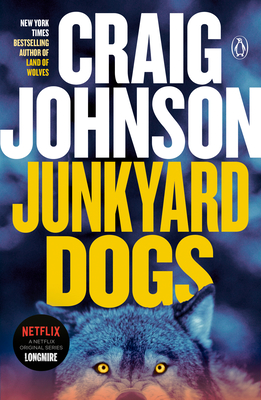 “The bodies pile up almost as fast as the Valentine's Day snow in the award-winning author's sixth mystery featuring Sheriff Walt Longmire. When a severed thumb is found in the local junkyard, a collision course is set between the locals and multimillion-dollar developers eyeballing the adjacent property. All of Johnson's trademarks are here - great characters, witty banter, serious sleuthing, and a love of Wyoming bigger than a stack of derelict cars.”
— Brian Woodbury, The Toadstool Bookshop, Milford, NH
View the List

From the New York Times bestselling author of Land of Wolves, a modern-day ranch war takes place in the sixth Longmire novel

Junkyard Dogs, the sixth installment in the New York Times bestselling Longmire Mystery Series, the basis for LONGMIRE, the hit Netflix original drama series, takes us to Durant, Wyoming. It's a volatile new economy in Durant when the owners of a multimillion-dollar development of ranchettes want to get rid of the adjacent Stewart junkyard. Meeting the notorious Stewart clan is an adventure unto itself, and when conflict erupts—and someone ends up dead—Sheriff Walt Longmire, his lifelong friend Henry Standing Bear, and deputies Santiago Saizarbitoria and Victoria Moretti find themselves in a small town that feels more and more like a high-plains pressure cooker.

Walt Longmire is up to his badge in the darker aspects of human nature, making his way through the case with a combination of love, laughs, and derelict automobiles.