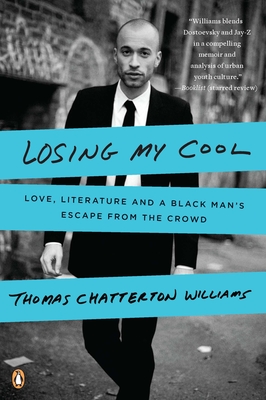 Love, Literature, and a Black Man's Escape from the Crowd

Growing up, Thomas Chatterton Williams knew he loved three things in life: his parents, literature, and the intoxicating hip-hop culture that surrounded him. For years, he managed to juggle two disparate lifestyles, "keeping it real" in his friends' eyes and studying for the SATs under his father's strict tutelage-until it all threatened to spin out of control. Written with remarkable candor and emotional depth, Losing My Cool portrays the allure and danger of hip-hop culture with the authority of a true fan who's lived through it all, while demonstrating the saving grace of literature and the power of the bond between father and son.

Praise For Losing My Cool: Love, Literature, and a Black Man's Escape from the Crowd…

"Losing My Cool starts out as an explicit argument about "loss of discipline and spirit in the hip-hop era" and shape-shifts into an engaging, well-written memoir. . . . There is much to admire in Losing My Cool, and more to anticipate from Williams.
-Jabari Asim, Washington Post

"Fanwood, N.J., does not have a literary pedigree, or even a downtown bookstore, and yet it has produced a very talented writer. In this memoir, Williams is transformed from a skinny teenager who shoots hoops, gets into bloody brawls and smacks his girlfriend, into a philosophy major and author."
-Tara McKelvey, New York Times

Rated 5 out of 5 stars by Froma F. (Boulder, CO)
Powerful indictment of hip hop culture
This is an important book. Williams chronicles his life in hip hop culture and his eventual break from that culture as he moves away from negative values (empty materialism, denigration of women) into a life of self examination. Along the way he becomes a philosophy major and Williams is particularly gifted at explaining difficult concepts in language that makes them seem quite simple. Although this is not an introduction to Heidegger or Hegel, you will walk away understanding the ideas they propound. The book is filled with extraordinary insight about the values hip hop culture promotes, what it is like to grow up middle class and black in America and how pernicious the hip hop values are for most young, black people. Williams is very insightful and is most compelling when he reflects on his life. One caveat: Williams seems somewhat uncomfortable and overly self-conscious when writing about himself and the people he knows and in the early part of the book, the writing is stilted. Persist! This is a book that is well worth reading.
Rated 5 out of 5 stars by Maria P. (Washington, DC)
Culture Shift
The ideas proposed in this book offer a culture shift away from what some believe to be popular, cool and hip. Hip today is not what hip was yesterday, and will not be what hip is tomorrow. The challenge for the young who want to be part of a group for reasons of safety, coolness or just belonging is to find the thoughts that can help create a cool, safe free society. The challenge for adults is to remember that what they do and say is heard and repeated by future generations. In "Losing My Cool" the family is challenging and wise and strongest group of all.

Rated 5 out of 5 stars by Marta M. (Tustin, CA)
An interesting read
I found this book very interesting. In fact I couldn't put it down and I was reading it while on vacation. On vacation I usually read fiction. The author is well educated and the book is well written. It explained a lot to me about my fifth grade students. They all fans of hip-hop music but not so much with the education. This gives me a small insight into their world. This might help me in teaching them. I liked the way he blended philosophy with the fascinating story of his life. I don't think we have heard the last of this smart young man. I think that this is an important book that should be read by all.

Rated 5 out of 5 stars by Terye B. (Scotts Valley, CA)
How cool is cool?
This was a fascinating story on so many levels. A young black man struggles for his identity and finds it in the black culture of Hip Hop and BET television. While fitting into a crowd, a group he never gets to know his true self. When away at college he finds himself and learns to appreciate the structured, collegiate life his father was preparing him for since childhood. This true story is told in an easy tone, and brings back all the teenage struggles for acceptance and the awakening of adulthood. I would highly recommend this for a book group.

Rated 5 out of 5 stars by Irene M. (Ashland, OR)
Losing My Cool
This book is fascinating. I have not read anything that so clearly defines the peer pressure for young blacks in today's culture. I enjoyed reading about this author's decision-making process, and the influences that took him from a hip- hop life on the streets of his home town to become a graduate of Georgetown University with major in philosophy.

Rated 5 out of 5 stars by Kendra R. (New Orleans, LA)
Engaging and thought provoking
I found it so engaging I read it in a day. Williams provides insight into what draws people into the hip-hop lifestyle as well as what it means to be black today. As he evolves his perspective, so follows the narrative. I'm already looking forward to rereading it and sharing it with friends so we can discuss it, black and white together.

Rated 5 out of 5 stars by Barbara C. (Riverside, CA)
A Father's Love
Being the age of Thomas' father myself, that relationship was the thread that I followed through the book. The book was rich with philosophical turns, anecdotes, history, and culture from a very non-typical perspective....but very much driven by the loving, strong father. The book had so many facets to understand--hip hop to Hegel in 200 pages. I guess my desire would be to sit down at the table with Pappy and Thomas and understand the subtle nuances between their middle class and mine. I loved the book and couldn't put it down!

Rated 5 out of 5 stars by Beverly D. (Palm Harbor, FL)
a young man's look at hip hop
Williams examines the seductiveness and potential dangers of the hip hop lifestyle as it applied to him as a young man growing up in Plainfield,N.J. Ultimately finding his "place" through the study of Hegel, Heidegger and his father's unending belief in study & learning, Williams is able to love the music but ignore the philosophy and find his way as a young African -American philosopher and first time author.

Rated 5 out of 5 stars by Constance S. (Sacramento, CA)
Losing My Cool
It was difficult to read this well written, seemingly honest memoir by Thomas Chatterton Williams when I realized I was at odds with his conclusion about the reason so many African American students do poorly in school. He writes that they feel the need to adhere to only one culture, the hip hop one, and distance themselves from all others. This is called "keeping it real". As a Black woman I see this as only one of the causes.
The hip hop culture through music,movies, TV and materialism is fed non-stop to our children and it is seductive. Nothing else seems to grant many youngsters the feeling of solidarity and the swagger and the elusive cool. To turn away from this is considered being disloyal and acting white. It is better to remain with the group than to seek many other avenues of success through education.
Losing My Cool deserves four stars for creating a three dimensional picture of the hip hop world; and four stars for the very inspiring description of his awakening through his father's intellectual assistance and determination. I enjoyed his many references to philosophers and authors. I bookmarked and underlined his many well chosen quotations.

Rated 5 out of 5 stars by Susan R. (Dublin, NH)
Anticipating the next chapters in this man's life
This thoughtful memoir is written by a young man whose mother is white and whose father is a black man who came up in the pre-integration south. When he finally got the opportunity, Mr. Williams senior embraced books and scholarship wholeheartedly.
Growing up in a relatively white NJ suburb, the author and his brother bought completely into black culture as portrayed by BET and rap music. This is the story of how he moved selectively to the norms of the larger society. It's an interesting book with a few magnificent passages.

Rated 5 out of 5 stars by Rosario

Thomas Chatterton Williams holds a Bachelor’s degree in philosophy from Georgetown University and a Master’s degree from the Cultural Reporting and Criticism program at New York University. In 2007, he wrote an op-ed piece entitled “Yes, Blame Hip-Hop” for the Washington Post which generated a record-breaking number of comments. He writes for the literary magazine n+1 and currently lives in Brooklyn.
Loading...
or support indie stores by buying on