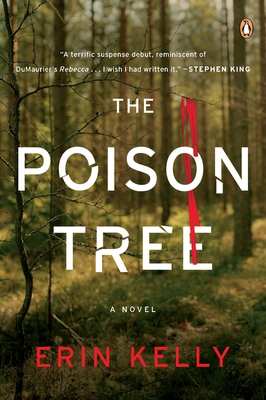 "A terrific suspense debut, reminiscent of Du Maurier's Rebecca. I wish I had written it."--Stephen King

With its hip London backdrop and expert pacing, Erin Kelly's masterful debut, The Poison Tree, delivers all the way through to its shocker of an ending.

London, 1997. Karen meets exotic, flamboyant Biba and, spellbound, she moves into the crumbling mansion Biba shares with her enigmatic brother, Rex. Drugs and wine flow as Rex and Karen begin an affair, but their summer of freedom is about to end in blood. Ten years later, Karen and nine-year-old Alice pick up Rex from his stint in prison for murder. When old ghosts come calling, Karen will do whatever it takes to protect her family. She is a woman with everything to lose.


Praise For The Poison Tree: A Novel…

Praise for THE POISON TREE:

“A terrific suspense debut, reminiscent of another British woman’s auspicious bow: Daphne DuMaurier’s Rebecca. The shadows gather until the ending looms like a threatening figure. This one gets the writer’s ultimate bit of praise: I wish I had written it.”
—Stephen King

Erin Kelly read English and European literature at Warwick University and has worked as a freelance journalist for more than ten years. She has written for The Sunday Times, The Sunday Telegraph, The Daily Mail, Psychologies, Red, Elle, Marie Claire, Cosmopolitan, and Glamour. She lives in North London with her husband and daughter.
Loading...
or
Not Currently Available for Direct Purchase