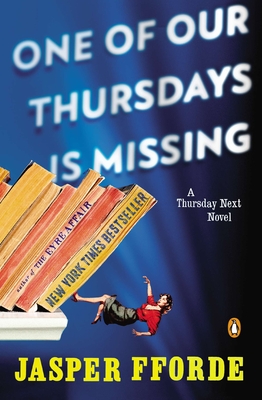 One of Our Thursdays Is Missing

Dazzlingly funny and imaginative, Jasper Fforde's books have won him the affection of readers, reviewers, and-dare we say it-booksellers alike. Fans can breathe a sigh of relief because Thursday Next-or at least one of her-is back. At a time of great unrest in the BookWorld, only the ace literary detective can avert a devastating Genre War—thing is, Thursday has vanished. Now the written Thursday must answer the call, save the Bookworld, evade capture, and find the actual Thursday! With a clockwork Butler in tow, and Men in Plaid as well as her Designated Love Interest in pursuit, she must reluctantly agree to journey up the mysterious Metaphoric River for answers.

Praise For One of Our Thursdays Is Missing: A Thursday Next Novel…

“One of Our Thursdays is Missing, like other Fforde novels, is jam packed with spot-on parody, puns and wry observations about words and genres that will delight literary-minded fans of the series.”
—Los Angeles Times

“Fforde’s diabolical meshing of insight and humor makes a ‘mimefield’ both frightening and funny, while the reader must traverse a volume that’s minefield of unexpected turns and amusing twists.”
—Publishers Weekly

“One of Our Thursdays is Missing is filled with passages [in] which geeky humor jostles with genuine insight about the current state of fiction. . . . [T]ake a joy ride with the passionate reader who wrote this novel.”
—Milwaukee Journal-Sentinel

“Forget all the rules of time, space and reality; just sit back and enjoy the adventure.”
—Sunday Telegraph

“A riot of puns, in-jokes and literary allusions that Fforde carries off with aplomb”
—Daily Mail

Jasper Fforde traded a varied career in the film industry for staring vacantly out of the window and arranging words on a page. He lives and writes in Wales. The Eyre Affair was his first novel in the bestselling series of Thursday Next novels, which includes Lost in a Good Book, The Well of Lost Plots, Something Rotten, First Among Sequels, One of Our Thursdays is Missing, and The Woman Who Died A Lot. The series has more than one million copies (and counting) in print. He is also the author of The Big Over Easy and The Fourth Bear of the Nursery Crime series, Shades of Grey, and books for young readers, including The Last Dragonslayer. Visit jasperfforde.com.
Loading...
or support indie stores by buying on