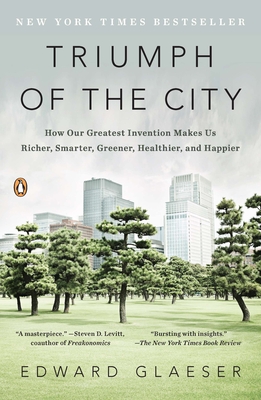 Triumph of the City (Paperback)

America is an urban nation, yet cities get a bad rap: they're dirty, poor, unhealthy, environmentally unfriendly . . . or are they? In this revelatory book, Edward Glaeser, a leading urban economist, declares that cities are actually the healthiest, greenest, and richest (in both cultural and economic terms) places to live. He travels through history and around the globe to reveal the hidden workings of cities and how they bring out the best in humankind. Using intrepid reportage, keen analysis, and cogent argument, Glaeser makes an urgent, eloquent case for the city's importance and splendor, offering inspiring proof that the city is humanity's greatest creation and our best hope for the future.

Edward L. Glaeser is the Fred and Eleanor Glimp Professor of Economics at Harvard University. He studies the economics of cities, housing, segregation, obesity, crime, innovation and other subjects, and writes about many of these issues for Economix. He serves as the director of the Taubman Center for State and Local Government and the Rappaport Institute for Greater Boston. He is also a senior fellow at the Manhattan Institute. He received his Ph.D. from the University of Chicago in 1992.