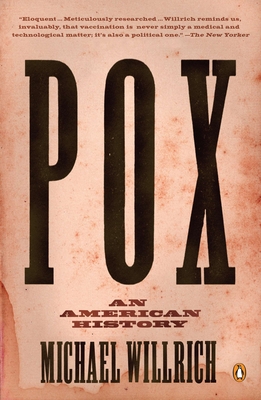 The untold story of how America's progressive-era war on smallpox sparked one of the great civil liberties battles of the twentieth century.

At the turn of the last century, a smallpox epidemic swept the United States from coast to coast. In this gripping account, award- winning historian Michael Willrich chronicles the government's fight against the outbreak and the ensuing clash of modern medicine, civil liberties, and state power. Pox introduces readers to memorable characters on both sides of the debate-from the doctors and club- wielding police charged with enforcing the law to vaccinate every citizen to the anti-vaccinationists, who stood up for their individual freedoms but were often dismissed as misguided cranks. Riveting and thoroughly researched, Pox delivers a masterful examination of progressive-era history that resonates powerfully today.

Michael Willrich is the award-winning author of City of Courts. He is an associate professor of history at Brandeis University and a former journalist who wrote for The Washington Monthly, City Paper, The New Republic, and other magazines. He lives in Wellesley, Massachusetts.
Loading...
or
Not Currently Available for Direct Purchase