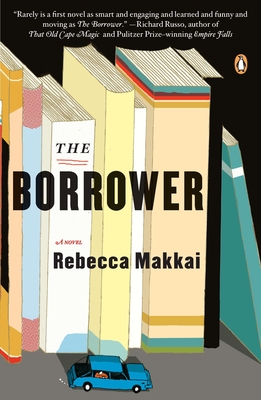 The first novel from the acclaimed author of The Great Believers

"Rarely is a first novel as smart and engaging and learned and funny and moving as The Borrower." —Richard Russo, author of Pulitzer Prize–winning Empire Falls

Lucy Hull, a children’s librarian in Hannibal, Missouri, finds herself both kidnapper and kidnapped when her favorite patron, ten-year-old Ian Drake, runs away from home. Ian needs Lucy’s help to smuggle books past his overbearing mother, who has enrolled Ian in weekly antigay classes. Desperate to save him from the Drakes, Lucy allows herself to be hijacked by Ian when she finds him camped out in the library after hours, and the odd pair embarks on a crazy road trip. But is it just Ian who is running away? And should Lucy be trying to save a boy from his own parents?


Praise For The Borrower: A Novel…

"Rarely is a first novel as smart and engaging and learned and funny and moving as The Borrower. Rebecca Makkai is a writer to watch, as sneakily ambitious as she is unpretentious."—Richard Russo, Pulitzer Prize winning author of That Old Cape Magic and Empire F

“This comical and touching book strikes a nice balance between literary artistry and gripping storytelling, and offers a contemporary take on the classic “journey of discovery.”…Right up to the book’s satisfying and well-plotted ending, Makkai shows us that even though the stories we are told as children are often fount to betray us as mere fantasy, there might still be some wisdom in the one of their most common and simple morals: Be true to yourself.”—The Daily Beast, Selected as one of "3 Must Read Novels"

“Rebecca Makkai’s The Borrower is full of books, libraries, cross-country hijinks, accidental parenting, love gone wrong and friendships gone right. Makkai will have you cheering for her librarian heroine, who has all the history and darkness of a Russian novel in her veins, mixed with the humor and spirit of Bridget Jones. A fun, moving, and delightful read.”—Hannah Tinti, author of The Good Thief

“How could any reader of any age resist Rebecca Makkai’s charming The Borrower, a novel that tracks the relationship between a 20-something librarian and a 10-year-old boy with punitive parents. Part caper (the two take off on a road trip that has moments of danger but never turns dark), part coming-of-age (and not just for the kid!) story, it manages, with good humor and wry self-knowledge, to read our minds.”—O, Oprah Magazine

“A lively, lovely read that delicately weaves together social activism, literary culture and the quintessential road trip motif into a single solid adventure tale…Reading The Borrower is like taking a blissfully nostalgic journey into the bookshelves of American childhood.”—WSJ.com

“A wise and likable tale about the difficulty of protecting a precocious imagination.”—The Wall Street Journal

“Poignant...every conflicted word Lucy utters in Makkai’s probing novel reminds us that literature matters because it helps us discover ourselves while exploring the worlds of others.”—The Chicago Tribune

Rebecca Makkai’s stories have been anthologized in The Best American Short Stories 2008, 2009, and 2010, and have appeared in Tin House, Ploughshares, The Threepenny Review, and on NPR’s Selected Shorts. Makkai teaches elementary school and lives north of Chicago with her husband and two daughters.
Loading...
or
Not Currently Available for Direct Purchase