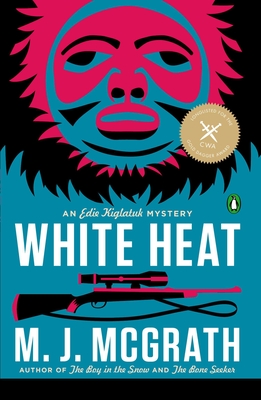 Longlisted for the CWA Gold Dagger Award, White Heat is the first book in the gripping Edie Kiglatuk Mystery Series, with "an Arctic setting so real it’ll give you frostbite" (Dana Stabenow, author of A Cold Day for Murder)

Half Inuit and half outsider, Edie Kiglatuk is the best guide in her corner of the Arctic. But as a woman, she gets only grudging respect from her community's Council of Elders. While Edie is leading two tourists on a hunting expedition, one of them is shot and killed. The Council wants to call it an accident, but Edie and police sergeant Derek Palliser suspect otherwise. When the other tourist disappears, Edie sets off into the far reaches of the tundra for answers.

A stunning debut novel, White Heat launches a formidable new series set amidst an unforgiving landscape of ice and rock, of spirit ancestors, and never-rotting bones.

“M.J. McGrath opens a window onto a fascinating and disappearing culture in this haunting mystery.” — Parade Magazine "12 Great Summer Books"

“[McGrath] weaves a strong strand of whodunit into a broader story about life in a 21st-century community on Canada's Ellesmere Island. The plot is wholly satisfying, and McGrath's portrait of a culture that uneasily blends yesterday and today is engrossing on its own merits. The Arctic is a big place — big enough, one hopes, for Edie Kiglatuk to find another mystery that needs solving between warm bowls of seal blood soup fresh from the microwave.” — Associated Press

“In a gripping debut novel, McGrath (who has written nonfiction as Melanie McGrath) transports the reader to a land of almost incomprehensible cold and an unfamiliar but fascinating culture, taking on issues of climate change, energy exploration, local politics, and drug and alcohol abuse. Edie, a fiercely independent woman in a male-dominated milieu, is sure to win fans. Expect great things from this series.” — Booklist (starred review)

“An arctic setting so real it’ll give you frostbite.” — Dana Stabenow, author of A Cold Day for Murder and Though Not Dead: A Shugak Nov

“A solid thriller…A picture soon emerges that includes a fight for precious natural resources and secrets that stretch back generations. McGrath captures the frigid landscape beautifully, and her heroine personifies the tension between the Inuit and qalunaat ways of life.” — Publishers Weekly

“This debut novel encompasses the hard, otherworldly beauty of the far north and the rapaciousness of energy moguls determined to exploit the area’s natural resources…[McGrath] skillfully describes the destabilizing effects of global warming, on both the landscape and the lives of the people settled there.” — The New Yorker

“White Heat is a blazing star of a thriller: vivid, tightly-sprung, and satisfying on all levels. Encountering Edie Kiglatuk, the toughest, smartest Arctic heroine since Miss Smilla, left me with that rare feeling of privilege you get on meeting extraordinary people in real life. A huge achievement.” — Liz Jensen, bestselling author of The Rapture

“M. J. McGrath’s White Heat pulls you along like a steel cable, inexorably welding you to the characters and a place that you’ll never forget.” — Craig Johnson, New York Times bestselling author of Hell Is Empty

“With a poet’s confidence McGrath makes an unforgiving Arctic landscape, and then gives us a smart and strong yet vulnerable survivor in Edie Kiglatuk. You root for Edie. You can’t do otherwise. In her risk-all pursuit of truth resides the best in all of us.” — Kirk Russell, author of Redback: A John Marquez Crime Novel

"M.J. McGrath’s White Heat is a tour de force, a book with a stunning grip on all the elements that make a mystery story great. The characters are unique and profoundly human, the plot wonderfully labyrinthine, and the sense of place beautifully—chillingly—evoked. I challenge any reader to pick up this marvelous novel and not be completely mesmerized."—William Kent Kreuger, author of Vermilion Drift — Willian Kent Kreuger

“Once in a blue moon a book comes along that exposes the world to us in a new light, makes us question everything: who we are, what we think we know, our beliefs and values, even the nature and purpose of our existence. White Heat is such a book. Seek it out and bask in it.”—James Thompson, author of Lucifer’s Tears — James Thompson

“Once in a blue moon a book comes along that exposes the world to us in a new light, makes us question everything: who we are, what we think we know, our beliefs and values, even the nature and purpose of our existence. White Heat is such a book. Seek it out and bask in it.”—James Thompson, author of Lucifer’s Tears — Val McDermid

M. J. McGrath is an award-winning journalist and the author of The Long Exile: A Tale of Inuit Betrayal. She was awarded the Mail on Sunday/John Llewellyn Rhys Prize for best British writer under thirty-five, and currently lives in London.
Loading...
or support indie stores by buying on
(This book is on backorder)