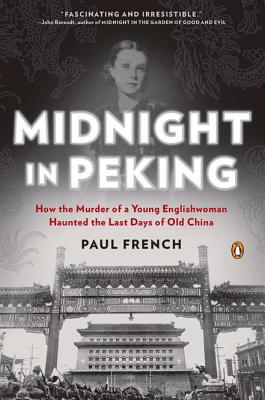 Peking in 1937 is a heady mix of privilege and scandal, opulence and opium dens, rumors and superstition. The Japanese are encircling the city, and the discovery of Pamela Werner's body sends a shiver through already nervous Peking. Is it the work of a madman? One of the ruthless Japanese soldiers now surrounding the city? Or perhaps the dreaded fox spirits? With the suspect list growing and clues sparse, two detectives one British and one Chinese race against the clock to solve the crime before the Japanese invade and Peking as they know it is gone forever. Can they find the killer in time, before the Japanese invade?

Historian and China expert Paul French at last uncovers the truth behind this notorious murder, and offers a rare glimpse of the last days of colonial Peking.


Praise For Midnight in Peking: How the Murder of a Young Englishwoman Haunted the Last Days of Old China…

“This is a good murder story, well told, with all the additional pleasures that a knowledgeable tour guide to old China can provide. Grateful readers could scarcely ask for more.”  – Joseph Kanon, author of Istanbul Passage, in The Washington Post

“Never less than fascinating… one of the best portraits of between-the-wars China that has yet been written.” – The Wall Street Journal

“Midnight in Peking is both a detective story and a social history, and therefore – as it should – always keeps the hunt for Pamela’s killers somewhere near the center of the narrative. [Paul French] is a wonderfully dexterous guide” – Jonathan Spence in The New York Review of Books

“A crime story set among sweeping events is reminiscent of Graham Greene, particularly The Third Man, while French's terse, tightly-focussed style has rightly been compared to Chandler. Midnight in Peking deserves a place alongside both these masters.” – The Independent

“A page-turning and fascinating true crime book. This is a genre-breaker that captures the atmosphere of 1930s Peking.” – The Bookseller [selected as One to Watch]

“…the most talked-about read in town this year.” – The New Yorker’s Page-Turner Blog

“Midnight in Peking is true-crime writing at its best, full of vivid characters, an exotic locale, secrets galore, and a truly bewildering mystery.” – The Christian Science Monitor

“…A compulsively readable true crime work in the tradition of Devil in the White City.” – The Atlantic.com

“Not only does Mr. French succeed in solving the crime, he resurrects a period that was filled with glitter as well as evil, but was never, as readers will appreciate, known for being dull.” – The Economist

Paul French lives in Shanghai, where he is a business advisor and analyst. He frequently comments on China for the English-speaking press around the world. French studied history, economics, and Mandarin at university and has an M.Phil. in economics from the University of Glasgow.
Loading...
or
Not Currently Available for Direct Purchase