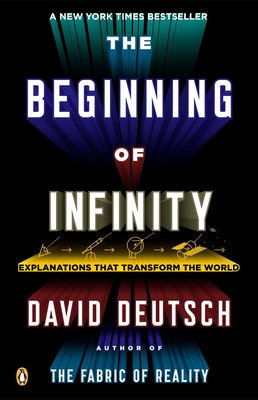 The Beginning of Infinity

Explanations That Transform the World

The New York Times bestseller: A provocative, imaginative exploration of the nature and progress of knowledge

In this groundbreaking book, award-winning physicist David Deutsch argues that explanations have a fundamental place in the universe—and that improving them is the basic regulating principle of all successful human endeavor. Taking us on a journey through every fundamental field of science, as well as the history of civilization, art, moral values, and the theory of political institutions, Deutsch tracks how we form new explanations and drop bad ones, explaining the conditions under which progress—which he argues is potentially boundless—can and cannot happen. Hugely ambitious and highly original, The Beginning of Infinity explores and establishes deep connections between the laws of nature, the human condition, knowledge, and the possibility for progress.


Praise For The Beginning of Infinity: Explanations That Transform the World…

"Brilliant and exhilarating . . . Deutsch is so smart, and so strange, and so creative, and so inexhaustibly curious, and so vividly intellectually alive, that it is a distinct privilege to spend time in his head." --The New York Times Book Review

"[Deutsch] makes the case for infinite progress and such passion, imagination, and quirky brilliance that I couldn't help enjoying his argument. . . . [He] mounts a compelling challenge to scientific reductionism." --The Wall Street Journal

“A deep theory of why humanity is destined to make progress may be found in David Deutsch’s dazzling The Beginning of Infinity.  Deutsch presents science as a force for betterment, since it impels us to explain the world while forcing us to acknowledge our fallibility.” – Steven Pinker, The Guardian

"Provocative and persuasive . . . Address[es] subjects from artificial intelligence to the evolution of culture and creativity." --The Economist

“[Deutsch’s books] are among the most ambitious works of nonfiction I have read, in that their aim is no less than an explanation of all reality. . . . They are treatises that weave together not just physics and astronomy but biology, mathematics, computer science, political science, psychology, philosophy, aesthetics, and—most important for Deutsch—epistemology, among other fields, in fashioning a profound new view of the world and the universe.” --The New Yorker’s Book Bench

“Deutsch has an important message . . . that our destiny is to be explainers of the world around us, and explaining is the key to our mastery. . . . He writes clearly and thinks wisely. His book could help the world toward better ways of dealing with its problems.” --Freeman Dyson, The New York Review of Books

Born in Haifa, Israel, David Deutsch was educated at Cambridge and Oxford Universities. He is a Fellow of the Royal Society and a professor of physics at the University of Oxford, where he is a member of the Centre for Quantum Computation. His papers on quantum computation laid the foundations for that field, and he is an authority on the theory of parallel universes. His honors include the Institute of Physics' Paul Dirac Prize and Medal. The author of The Fabric of Reality, he lives in England.
Loading...
or support indie stores by buying on