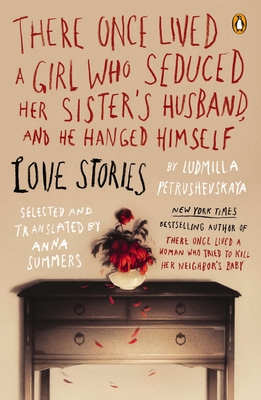 There Once Lived a Girl Who Seduced Her Sister's Husband, and He Hanged Himself

Love stories, with a twist, by Russia’s preeminent contemporary fiction writer—the author of the prizewinning memoir about growing up in Stalinist Russia, The Girl from the Metropol Hotel

By turns sly and sweet, burlesque and heartbreaking, these realist fables of women looking for love are the stories that Ludmilla Petrushevskaya—who has been compared to Chekhov, Tolstoy, Beckett, Poe, Angela Carter, and even Stephen King—is best known for in Russia.

Praise For There Once Lived a Girl Who Seduced Her Sister's Husband, and He Hanged Himself: Love Stories…

“This gem’s exquisite conjugation of doom and disconnect is so depressingly convincing that I laughed out loud. . . . On par with the work of such horror maestros as Edgar Allan Poe.” —Ben Dickinson, Elle

“Petrushevskaya writes instant classics. . . . These, as the title proclaims, are love stories, scored to a totalitarian track.” —The Daily Beast

“Combines the brevity of Lydia Davis with the familial strangleholds of Chekhov. They’re short and brutal, but often elegant in their economy.” —The Onion A.V. Club

“Full of off-kilter, lurid, even violent attempts at connection.” —Flavorwire, 10 of the Most Twisted Short Stories About Love

“Heartbreaking, but . . . also beautiful and touching in describing how, if not love, at least companionship, can save the most lost souls.” —The Rumpus

“These bitter, funny, and often absurd tales of love between unsuspecting men and women paint a bleak picture of Soviet living and the frequent (im)possibilities of love.” —PopMatters

“An important writer . . . Russia’s best-known . . . She’s a much better storyteller than her American counterparts in the seedy surreal. . . . Petrushevskaya’s stories should remind her readers of our own follies, illusions and tenderness.” —Chicago Tribune

“This is romance Russian-style, ‘tough love’ in its most literal sense, yet somehow, its bleakness is more satisfying in its humanity and aesthetic simplicity than the sugary appeal of so many popular love stories.” —Rain Taxi

“Think Chekhov writing from a female perspective. . . . Petrushevskaya’s short stories transform the mundane into the near surreal, pausing only to wink at the absurdity of it all.” —Kirkus Reviews

“This celebrated Russian author is so disquieting that long after Solzhenitsyn had been published in the Soviet Union, her fiction was banned—even though nothing about it screams ‘political’ or ‘dissident’ or anything else. It just screams.” —Elle


“Her suspenseful writing calls to mind the creepiness of Poe and the psychological acuity (and sly irony) of Chekhov.” —More


“The fact that Ludmilla Petrushevskaya is Russia’s premier writer of fiction today proves that the literary tradition that produced Dostoyevsky, Gogol, and Babel is alive and well.” —Taylor Antrim, The Daily Beast


“What distinguishes the author is her compression of language, her use of detail and her powerful visual sense.” —Time Out New York


“A master of the Russian short story.” —Olga Grushin, author of The Dream Life of Sukhanov


“There is no other writer who can blend the absurd and the real in such a scary, amazing and wonderful way.” —Lara Vapnyar, author of There Are Jews in My House


“One of the greatest writers in Russia today and a vital force in contemporary world literature.” —Ken Kalfus, author of A Disorder Peculiar to the Country


“A master of the short story form, a kindred spirit to writers like Angela Carter and Yumiko Kurahashi.” —Kelly Link, author of Magic for Beginners and Stranger Things Happen

Ludmilla Petrushevskaya was born in 1938 in Moscow, where she still lives. She is the author of more than fifteen volumes of prose, including the New York Times bestseller There Once Lived a Woman Who Tried to Kill Her Neighbor’s Baby: Scary Fairy Tales, which won a World Fantasy Award and was one of New York magazine’s Ten Best Books of the Year and one of NPR’s Five Best Works of Foreign Fiction; There Once Lived a Girl Who Seduced Her Sister’s Husband, and He Hanged Himself: Love Stories; and a prizewinning memoir, The Girl from the Metropol Hotel. A singular force in modern Russian fiction, she is also a playwright whose work has been staged by leading theater companies all over the world. In 2002 she received Russia’s most prestigious prize, The Triumph, for lifetime achievement.