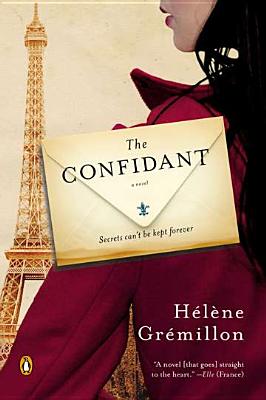 “Infertility and infidelity lie at the heart of this very French romance. In 1975, Camille, a young Parisian editor who has just lost her mother, receives an unusual letter of condolence, the first of a weekly series of lengthy reminiscences from an anonymous source concerning events and people in wartime France from 1939 to 1943. Is it an author with a novel method of getting an editor's attention or a bona fide memoir of prewar France? And is Camille really the intended recipient? Family secrets, unsuspected for 30 years, shake Camille to her core in this suspenseful and intricately plotted debut.”
— Darwin Ellis, Books On The Common, Ridgefield, CT
View the List

Paris, 1975. Camille sifts through letters of condolence after her mother's death when a strange, handwritten missive stops her short. At first she believes she received it by mistake. But then, a new letter arrives each week from a mysterious stranger, Louis, who seems intent on recounting the story of his first love, Annie. They were separated in the years before World War II when Annie befriended a wealthy, barren couple and fell victim to a merciless plot just as German troops arrive in Paris. But also awaiting Camille's discovery is the other side of the story, which will call into question Annie's innocence and reveal the devastating consequences of jealousy and revenge. As Camille reads on, she begins to realize that her own life may be the next chapter in this tragic story.

Helene Gremillon was born in France in 1977. She has degrees in literature and history and has worked as a journalist at the French newspaper, Le Figaro, before becoming a full-time writer. She lives in Paris with her partner, singer and songwriter Julien Clerc, and their child. She receivedThe Prince Pierre Literary Prize forThe Confidant, her first novel. Visitwww.helenegremillon.com."

Praise For The Confidant…

“The Confidant  is an impressive blend of historical precision, high suspense and sharp-sighted psychological truths. A gorgeous, captivating novel with brilliant storytelling. It’s a novel that will stay with me.”
-Amanda Hodgkinson, New York Times bestselling author of 22 Britannia Road

“Captivating and haunting, the passion and heartache absolutely leap off the page in Hélène Grémillon’s The Confidant . The first thing you’ll want to do after finishing, is to flip to the first chapter and start reading it all over again, combing for overlooked clues.”
-Sarah Jio, author of Blackberry Winter and The Violets of March

“Succumb to a very French story and allow yourself to be seduced by Hélène Grémillon’s serpentine tale of wartime passion and revenge. As the past intensifies its grip on a young woman’s present, shifting perspectives exert an irresistible pull. Direct, unsettling and atmospheric.”
-Deborah Lawrenson, author of The Lantern

“Helene Gremillon tells her heartrending tale of human frailty, cruelty and love in prose of subtle elegance, and her flawed, fascinating characters stayed with me long after I’d finished the book. This is poised and beautiful storytelling.”
-Margaret Leroy, author of The Soldier's Wife

“The Confidant  is a must read for anyone who loves intrigue. It will keep you guessing until the very last page - beautifully written, original and thoroughly engaging.”
-Sandra Smith, translator of Suite Fran���aise

“A beautiful, intricate book, The Confidant is held together with delicate threads and secrets. I scarcely know how to review it without inadvertently giving one away. It’s a story of enduring emotions—love, jealousy, revenge—and the lengths that we will go to in their name. A love story, a thriller, a war novel, The Confidant is hard to put down. And, when you do, you’ll want to flip back to the beginning and read again to see what clues you may have missed the first time. This gripping little story with its flawed, yet memorable characters is highly recommended.” An Editor's Choice pick, February 2013

"Hélène Grémillon takes us to the heart of a family secret. We witness undeclared love, hidden hatreds, and revenge with terrible consequences. She writes of two periods in time in two voices. And we are twice as caught up in this book which truly touches our hearts."
-ELLE (France)

"The reader is literally riveted to this story, both thriller and historical account. The text has accents of maturity, a stunning mastery of narration, a sense of suspense worthy of a top-notch film. A gripping first novel."
-Le Figaro Litteraire

"Hélène Grémillon's talent bursts forth in this first novel, as much for the style as the historical details and the suspense that persists up to the very last paragraph. As for the main characters... they are all complex, unpredictable and above all charismatic."
-Le Nouvel Observateur

“This most assured first novel is structured like a series of matryoshka dolls; as we start reading, stories within stories are revealed until we are finally faced with the gem at the centre. Grémillon’s conclusion to what is both mystery story and romance is an absolute crackerjack.”
-The Saturday Age (Australia)

“Sensitively written, it is a suspenseful, absorbing tale about the power of history and how it plays on the present.”
-Herald on Sunday (Australia)

“A novel about the complicity between history with a small ‘h’ — the characters’ stories—and History with a capital ‘H.’  As in Bernard Schlink’s The Reader, nothing is more moving than to witness characters as castaways shipwrecked by History.”
-BSC News (France)