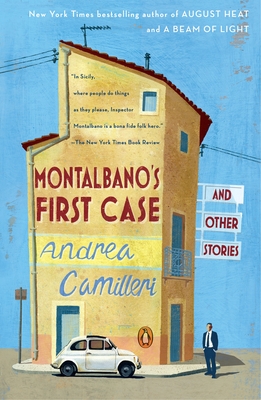 Inspector Montalbano has charmed readers in nineteen popular novels, and now in Montalbano’s First Case and Other Stories, Andrea Camilleri has selected twenty-one short stories, written with his trademark wit and humor, that follow Italy’s famous detective through highlight cases of his career. From the title story, featuring a young deputy Montalbano newly assigned to Vigàta, to “Montalbano Says No,” in which the inspector makes a late-night call to Camilleri himself to refuse an outlandish case, this collection is an essential addition to any Inspector Montalbano fan’s bookshelf and a wonderful way to introduce readers to the internationally bestselling series.

Andrea Camilleri is the author of the New York Times–bestselling Inspector Montalbano mystery series as well as historical novels that take place in nineteenth-century Sicily. His books have been made into Italian television shows and translated into thirty-two languages. His thirteenth Montalbano novel, The Potter’s Field, won the Crime Writers’ Association International Dagger Award and was longlisted for the IMPAC Dublin Literary Award.

Stephen Sartarelli (translator) is an award-winning translator and the author of three books of poetry.

"A sparking collection... This is a treat for admirers of the Montalbano novels and a superb introduction for new readers."
—Publishers Weekly (starred review/Pick of the Week)

"Series fans will especially enjoy learning the origins of Montalbano and company... newcomers may be intrigued by Camilleri's droll humor and nifty storytelling."—Kirkus Reviews


Praise for Camilleri and the Inspector Montalbano mystery series

“Camilleri’s Inspector Montalbano mysteries might sell like hotcakes in Europe, but these world-weary crime stories were unknown here until the oversight was corrected (in Stephen Sartarelli’s salty translation) by the welcome publication of The Shape of Water…This savagely funny police procedural…prove[s] that sardonic laughter is a sound that translates ever so smoothly into English.”
—The New York Times Book Review

“Camilleri is as crafty and charming a writer as his protagonist is an investigator.”
—The Washington Post Book World

“Subtle, sardonic, and molto simpatico: Montalbano is the Latin re-creation of Philip Marlowe, working in a place that manages to be both more and less civilized than Chandler’s Los Angeles.”—Kirkus Reviews (starred)

“Wit and delicacy and the fast-cut timing of farce play across the surface…but what keeps it from frothing into mere intellectual charm is the persistent, often sexually bemused Montalbano, moving with ease along zigzags created for him, teasing out threads of discrepancy that unravel the whole.”—Houston Chronicle