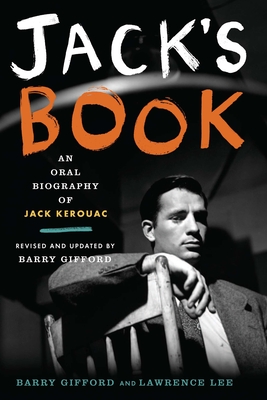 An Oral Biography of Jack Kerouac

"A fascinating literary and historical document, the most insightful look at the Beat Generation." —Dan Wakefield, author of New York in the Fifties and Going All the Way

First published in 1978, Jack's Book gives us an intimate look into the life and times of the "King of the Beats." Through the words of the close friends, lovers, artists, and drinking buddies who survived him, writers Barry Gifford and Lawrence Lee recount Jack Kerouac's story, from his childhood in Lowell, Massachusetts, to his tragic end in Florida at the age of forty-seven. Including anecdotes from an eclectic list of well-known figures such as Allen Ginsberg, William S. Burroughs, and Gore Vidal, as well as Kerouac's ordinary acquaintances, this groundbreaking oral biography—the first of its kind—presents us with a remarkably insightful portrait of an American legend and the spirit of a generation.

Barry Gifford is a poet, novelist, screenwriter, and librettist best known for the novel Wild at Heart, which was adapted into an award-winning film by David Lynch, and for cowriting the screenplay for Lynch's film Lost Highway. Published in twenty-eight languages, he has been the recipient of awards from PEN, the National Endowment for the Arts, the American Library Association, and the Writers Guild of America. He lives in the San Francisco Bay Area.

Lawrence Lee (d. 1990) was a Peabody Award–winning journalist who cowrote the acclaimed biography Saroyan with Gifford.


Praise For Jack's Book: An Oral Biography of Jack Kerouac…

“Jack’s Book is first rate…it offers the flavor and depth of good fiction while keeping well within the realm of literal truth.”


“I suggest you read Jack’s Book…Mr. Gifford and Mr. Lee seem to have interviewed everyone connected with Kerouac.”
— Vincent Canby


“A fascinating literary and historical document, the most insightful look at the beat generation.”
— Dan Wakefield

“There have been biographies of Kerouac, but this is an entirely different and much more satisfying work…not a static portrait, but a slow-moving picture of a man unfolding from childhood to heartbreak end; a drama whose focus or clarity or completeness changes depending on who’s holding the camera.  An engrossing tale.”


“A very immediate, crisp addition to the Kerouac papers—lively in its interspliced rhythms and…compelling.”


“If you’re interested in listening to what the talk of the Fifties sounded like, and if you believe that literature may just have something to do with life, then read this book.”


“My God, it’s just like Rashomon.  Everybody lies and the truth comes out.”
— Allen Ginsberg

“To read Jack’s Book is to be present at a gathering of Kerouac’s friends, colleagues, lovers, even his…enemies—of all the lives of Kerouac I have read, this one has the most life.”
— James Campbell