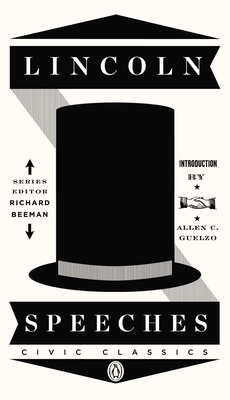 The defining rhetoric of Abraham Lincoln – politician, president, and emancipator

Penguin presents a series of six portable, accessible, and—above all—essential reads from American political history, selected by leading scholars. Series editor Richard Beeman, author of The Penguin Guide to the U.S. Constitution, draws together the great texts of American civic life to create a timely and informative mini-library of perennially vital issues. Whether readers are encountering these classic writings for the first time, or brushing up in anticipation of the 50th anniversary of the Civil Rights Act, these slim volumes will serve as a powerful and illuminating resource for scholars, students, and civic-minded citizens.

As president, Abraham Lincoln endowed the American language with a vigor and moral energy that have all but disappeared from today's public rhetoric. His words are testaments of our history, windows into his enigmatic personality, and resonant examples of the writer's art. Renowned Lincoln and Civil War scholar Allen C. Guelzo brings together this volume of Lincoln Speeches that span the classic and obscure, the lyrical and historical, the inspirational and intellectual. The book contains everything from classic speeches that any citizen would recognize—the first debate with Stephen Douglas, the "House Divided" Speech, the Gettysburg Address, the Second Inaugural Address—to the less known ones that professed Lincoln fans will come to enjoy and intellectuals and critics praise. These orations show the contours of the civic dilemmas Lincoln, and America itself, encountered: the slavery issue, state v. federal power, citizens and their duty, death and destruction, the coming of freedom, the meaning of the Constitution, and what it means to progress.

Abraham Lincoln was born in a log cabin in Kentucky in 1809 and was largely self-educated. As his family moved to Indiana and then Illinois, he worked as a hired hand, clerk, and surveyor until, in his twenties, he began to study law. He was elected to the Illinois House of Representatives in 1834. After marrying Mary Todd, Lincoln set up his own law practice and was elected to the U.S. Congress in 1846. As a candidate for the U.S. Senate in 1858, he debated Senator Stephen A. Douglas across the state and became a national figure. Nominated for president by the Republican Party, Lincoln was elected in November 1860 and took office in March 1861. Commander in chief of the Union forces during the Civil War, he issued the Emancipation Proclamation in 1863. Reelected in 1864, Abraham Lincoln was shot to death by an embittered Southern actor, John Wilkes Booth, in April 1865, five days after General Lee’s surrender at Appomattox.

Allen C. Guelzo is Henry R. Luce Professor of the Civil War Era and Director of Civil War Era Studies at Gettysburg College. He is the author of A Very Short Introduction: Lincoln, as well as two winners of the Lincoln Prize: Lincoln’s Emancipation Proclamation: The End of Slavery in America and Abraham Lincoln: Redeemer President.

Richard Beeman, the John Welsh Centennial Professor of History Emeritus at the University of Pennsylvania, has previously served as the Chair of the Department of History, Associate Dean in Penn's School of Arts and Sciences, and Dean of the College of Arts of Sciences. He serves as a trustee of the National Constitution Center and on the center's executive committee. Author of seven previous books, among them The Penguin Guide to the United States Constitution and Plain Honest Men: The Making of the American Constitution, Professor Beeman has received numerous grants and awards including fellowships from the National Endowment for the Humanities, the Rockefeller Foundation, the Institute for Advanced Study at Princeton, and the Huntington Library. His biography of Patrick Henry was a finalist for the National Book Award.
Loading...
or
Not Currently Available for Direct Purchase