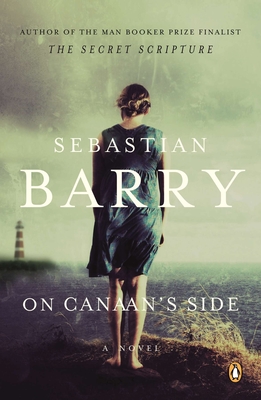 Longlisted for the Man Booker Prize, a mesmerizing new novel from the award-winning author of The Secret Scripture. Sebastian Barry's latest novel, Days Without End, is now available.

A first-person narrative of Lilly Bere’s life, On Canaan’s Side opens as the eighty-five-year-old Irish émigré mourns the loss of her grandson, Bill. Lilly, the daughter of a Dublin policeman, revisits her eventful past, going back to the moment she was forced to flee Ireland at the end of the First World War. She continues her tale in America, where—far from her family—she first tastes the sweetness of love and the bitterness of betrayal.


Praise For On Canaan's Side: A Novel…

“Sebastian Barry’s achievement, enhanced by his latest novel, On Canaan’s Side, may be too great to be defined by the Booker or any other literary prize. Barry, the greatest prose writer in Irish letters—which by definition makes him the greatest writer of prose in the English language…No other novelist now writing can convey as Barry does the way in which unrighted wrongs continue to reverberate down through the ages, creating new versions of old tragedies for people with no knowledge of their origins…On Canaan’s Side fits seamlessly into Barry’s unique and expanding vision, seeking to restore with language that which has been taken away by time. Its real subject isn’t politics or even history but memory, a memory which reveals that ‘a measure of tragedy is stitched into everything if you follow the thread long through.’” — Allen Barra, The Daily Beast "Must Reads"

“Richly detailed, often cinematic…This is no self-indulgent apologia, and Irish writer Sebastian Barry makes the fine distinction between sentiment and sentimentality with a deft hand...With all the quiet interiority and the equanimity with which events are recalled here, it’s easy to overlook how exciting those events were. The “plot” is full of surprises – many shocking. War, single parenthood, betrayal, unexpected acts of compassion, death too early – or in at least one case, too late – and race relations are all threads in the tapestry of Lilly’s life. Accommodations must be made at every turn and Lilly makes them, all the while maintaining her own moral poise. Deservedly short-listed twice previously for the Man Booker Prize, Barry in his current offering maintains, and at times exceeds, the high level of finely wrought empathy attained in those award nominees…And as in those two novels, the play of history as it most intimately affects individual lives in such an infinite variety of ways is on exquisitely touching display.” — The Philadelphia Inquirer

“Lilly Bere is exceptional. She frees herself from one homeland and takes root in another. Her story is as American as it is Irish…elegiac…this Dubliner’s portrayal of our city feels organic. From the East Ohio Gas explosion to a run-in with racism at Luna Park, he weaves a rich, authentic backdrop. His prose is roundabout and tender…It’s a testament to the power of Barry’s quietly elegant prose that her immigrant story seems so tragic and so real.” — Laura DeMarco, The Cleveland Plain Dealer

“Sebastian Barry is a significant Irish writer and his new novel, set mainly in the United States, is a wonderful introduction to his work…The plot is beautifully crafted. Lilly’s wanderings…make the story seem episodic, but Barry knows exactly what he’s doing; the latter part of the novel has several convincing surprises.” — Minneapolis Star-Tribune

“[A] compact but leisurely told narrative rich in mood and depth… On Canaan’s Side’s climactic pages glow with wonder and terror. They reach a catharsis of prose poetry as they mingle dramatically.” — New York Journal of Books

“Tripping, liquid prose that adroitly evokes everything from the smell of an Irish countryside to the heaviness of grief.” — Booklist

“Barry’s skills are evident as he tenderly unspools Lilly’s story, with a fine eye for intimate moments.” — Publishers Weekly

“A masterful novel filled with the bittersweet ruminations…It also sustains a page-turning momentum, leaving the reader in suspense until the very end whether this novel is an extended suicide note, a confession or an affirmation of life's blessings and embrace of its contradictions, as those various strains show the possibility of becoming one… Lilly reveals herself to be a woman of uncommon sense and boundless compassion…A novel to be savored.” — Kirkus Reviews

“On Canaan's Side is written with vast sympathy and tenderness. Sebastian Barry's handling of voice and cadence is masterly. His fictional universe is filled with life, quiet truth and exquisite intimacy; it is also fully alert to the power and irony of history. In evoking Lilly Bere, he has created a most memorable character.”—Colm Tóibín, author of the Costa Novel Award winning Brooklyn

“Barry takes quiet lives, in this instance Lilly Bere’s, adds the backdrop of political turmoil in Ireland after WWI, couples it with the expanse of 21st-century America, and ends up with a story that is both epic and intimate…this masterful storyteller takes[s] your breath away, after taking your hand and walking you through these lives, creating attachment and empathy for his characters yet leaving you with joy; appreciating light from the dark. You are safe and satisfied and enriched by his writing.” — Roxanne Coady, Publisher's Weekly "Galley Talk"

“Somewhere on the second page of this book, your heart will break, and you will devour every glimmering image and poetic line as if the sheer act of reading might alter the course of Lilly Bere's haunting tale.  A story of love and loss, as Irish as the white heather and as big-hearted as America itself.” —Helen Simonson, author of the New York Times bestselling Major Pettigrew’s Last Stand

“Sebastian Barry, one of Ireland’s most successful playwrights and novelists, is at his best when he is writing about those who find themselves marginalized in the new Ireland as it emerges from under the yoke of British. And in his new book, On Canaan’s Side, we once again find him dealing with characters whose lives are swept up in the changing tide of Ireland’s independence…As always with Barry, the language is beautiful. I had to slow myself down to savor the way he puts words together, for he is a master craftsman.” — Patricia, Harty Irish America

Sebastian Barry’s novel A Long Long Way was shortlisted for the Man Booker Prize, as was The Secret Scripture, which was also a Los Angeles Times Book Prize Finalist, winner of the Costa Book of the Year award and the James Tait Black Prize for Fiction, as well as the Irish Novel of the Year, and was selected as a Best Book of the Year by The Boston Globe and The Economist. His other novels include The Whereabouts of Eneas McNulty and Annie Dunne. His plays have been produced in London, Dublin, Sydney and New York. Barry lives in Wicklow, Ireland, with his wife and three children.
Loading...
or support indie stores by buying on
(This book is on backorder)