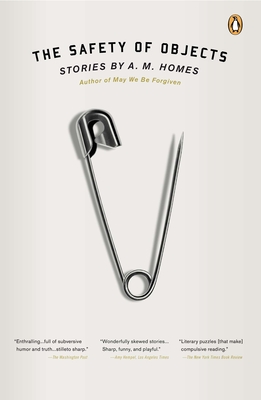 The Safety of Objects

The breakthrough story collection that established A. M. Homes as one of the most daring writers of her generation

Originally published in 1990 to wide critical acclaim, this extraordinary first collection of stories by A. M. Homes confronts the real and the surreal on even terms to create a disturbing and sometimes hilarious vision of the American dream. Included here are "Adults Alone," in which a couple drops their kids off at Grandma's and gives themselves over to ten days of Nintendo, porn videos, and crack; "A Real Doll," in which a girl's blond Barbie doll seduces her teenaged brother; and "Looking for Johnny," in which a kidnapped boy, having failed to meet his abductor's expectations, is returned home. These stories, by turns satirical, perverse, unsettling, and utterly believable, expose the dangers of ordinary life even as their characters stay hidden behind the disguises they have so carefully created.


Praise For The Safety of Objects: Stories…

Praise for The Safety of Objects:

“A.M. Homes’ provocative and funny and sometimes very sad takes on contemporary suburban life impressed me enormously. The more bizarre things get, the more impressed one is by A.M. Homes’ skills as a realist, a portraitist of contemporary life at its more perverse.” —David Leavitt

“Set in a world filled with edges to topple from, [The Safety of Objects] is permeated by the bizarre. . . . The unexpected emerges from the story itself, startling and unexpectedly right.” —The Cleveland Plain Dealer

A.M. Homes was born in Washington D.C. graduated from Sarah Lawrence College and the University of Iowa, lives in New York City and teaches at Princeton University. Her work appears in ArtForum, Granta, The Guardian, McSweeney’s, Modern Painters, The New Yorker, The New York Times, Electric Literature, Playboy, and Zoetrope. She works in television, most recently as as Co-Executive Producer of Falling Water and Stephen King’s Mr. Mercedes, and is a contributing editor to Vanity Fair. She is the  recipient of awards including the Guggenheim, NEA, and NYFA fellowships. Her most recent novel, May We Be Forgiven, won the Women’s Prize for Fiction, 2013, and has been optioned for film by Unanimous Entertainment.
Loading...
or
Not Currently Available for Direct Purchase