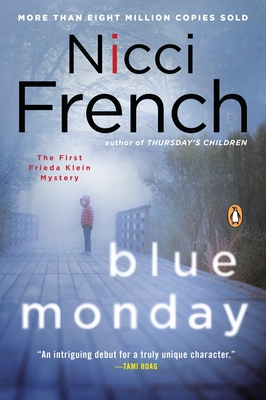 The first book in the Frieda Klein Mystery series

Immensely intelligent and poignantly human, Frieda Klein has captivated book critics and crime readers everywhere with her debut outing as Blue Monday's iconoclastic heroine. A psychotherapist and insomniac who spends her nights walking along the ancient rivers that lie beneath modern London, Frieda stars in a dazzling new crime series in which the terrors of the mind spill over into real life.

When five-year-old Matthew Farraday is abducted, Frieda cannot ignore the fact that his photograph perfectly matches the boy one of her patients describes from his fantasies. Before long, Frieda finds herself serving as the reluctant sidekick of Detective Chief Inspector Karlsson at the center of a desperate race to find the kidnapper. Blue Monday is an atmospheric, stunning first novel in a crime series for fans of In Treatment and The Killing.

Nicci French is the pseudonym for the internationally bestselling writing partnership of suspense writers Nicci Gerrard and Sean French. They are married and live in Suffolk and London, England.

“[A] superb psychological thriller . . . With its brooding atmosphere, sustained suspense, last-minute plot twist, and memorable cast of characters, this series debut will leave readers eager to discover what color Tuesday will be.”
—Publishers Weekly, starred review

"The plotting is fast-paced with surprises galore, and characters literally come to life on the pages. . . . When readers are through, they will find themselves waiting impatiently for Wednesday to arrive!"
—Suspense Magazine
or
Not Currently Available for Direct Purchase
Copyright © 2020 American Booksellers Association