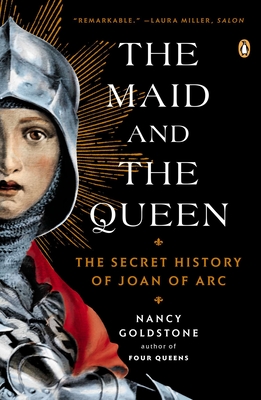 “Attention, ‘Game of Thrones’ fans: The most enjoyably sensational aspects of medieval politics—double-crosses, ambushes, bizarre personal obsessions, lunacy and naked self-interest—are in abundant evidence in Nancy Goldstone's The Maid and the Queen.” (Laura Miller, Salon.com)Joan of Arc, the brave peasant girl who heard the voices of angels and helped restore her king to the throne of France, astonished her contemporaries and continues to fascinate us today. Until now, though, her relationship with Yolande of Aragon, the ambitious and beautiful queen of Sicily—mother-in-law to the dauphin—has been little known. In a stunning work filled with intrigue, madness, and mysticism, Nancy Goldstone solves the thrilling mystery by showing that if you pry open the Queen's secrets, you will find the Maid's. Caught in the complex dynastic battle of the Hundred Years War, Yolande of Aragon championed the dauphin's cause. As French hopes dimmed, a courageous young woman arrived from the farthest recesses of the kingdom. But how did she gain an audience with a king? Was it only God's hand that moved Joan of Arc—or was it also Yolande of Aragon's?

Praise For The Maid and the Queen: The Secret History of Joan of Arc…

Praise for The Maid and the Queen by Nancy Goldstone:

“A dual biography of two fascinating medieval women with the descriptive energy of a novel.”
—USA Today (An Editor's Book Pick)

“Goldstone has peeled back the nostalgic drapery of The Maid of Orléans, and tells the most complete history of Joan of Arc that I have ever read. . . . Gripping and informative and should be the next book you read.”
—Sacramento/San Francisco Book Review

“With compelling storytelling, Goldstone colorfully weaves together the tales of these two women [Yolande of Aragon and Joan of Arc]-one rich, one poor; one educated, one illiterate; one worldly, one simple-whose powerful personalities and deep allegiance to France helped shape the country's future.”
—Publishers Weekly

“Goldstone's vivid retelling of Joan's astounding victories and her capture and martyrdom by the English is as gripping as ever . . . [A] knowledgeable and accessible account of a turning point in French history.”
—Kirkus Reviews

“[Nancy's] entertaining narrative will intrigue general readers interested in the Middle Ages, Joan of Arc (whose 600th birthday is this year), or biographies of royal figures or women in history.”
—Library Journal

“Goldstone adds an enlightening new chapter to a legendary saga and rescues another unjustly neglected woman from the dust pile of conventional history.”
—Booklist

“The mysterious and secret bond between the worldly and powerful Yolande of Aragon, queen of Sicily, and the transcendent Joan of Arc comes into glorious view in this meticulous, colorful study of their lives. A fascinating historical excursion, bursting with medieval flavor.”
—Margaret George, author of Elizabeth I

“A wonderful medieval tapestry of a book that tells the still-amazing story of Joan of Arc, a peasant girl-turned-warrior who saves her king and France, and the pivotal role played by yet another extraordinary woman, Yolande of Aragon, queen of Sicily, whenin this time of tumult and treachery Joan rose to such unexpected power.”
—Jill Jones, author of Eiffel's Tower

“Attention, ‘Game of Thrones’ fans: The most enjoyably sensational aspects of medieval politics—double-crosses, ambushes, bizarre personal obsessions, lunacy and naked self-interest—are in abundant evidence in Nancy Goldstone's The Maid and the Queen. . . .Thanks to this book, a bit more of [Yolande's] remarkable life has been coaxed out into the open.”
—Laura Miller, Salon.com

“A lively, fast-paced and fascinating account of Joan's story, weaving together the labyrinthine intrigues of medieval politics, the real story behind a medieval fairy tale and the astonishing events that led a young peasant girl from the command of an army to a fiery death at the hands of the English.”
—BookPage

Nancy Goldstone has written and coauthored several books, including Four Queens. She lives with her husband and coauthor Lawrence Goldstone in Westport, Connecticut.
Loading...
or
Not Currently Available for Direct Purchase