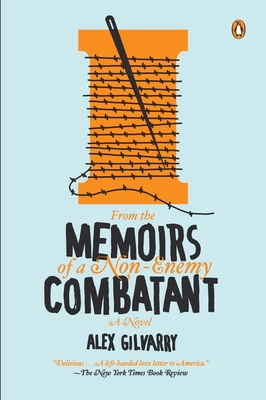 From the Memoirs of a Non-Enemy Combatant

“This is a bold book. It is bold in its style, its thesis, and its story. While Gilvarry's narrative and characters are big and playful, the underlying dilemmas are deadly serious: What happens to those falsely accused or mistakenly detained when the remedies of the American criminal justice system are unavailable to them? How does one prove one's innocence when the system is set up to prove one's guilt? Gilvarry skillfully navigates the space between black comedy and farce without delivering a polemic and instead gives us a novel that is delightful without being light.”
— Catherine Weller, Weller Book Works, Salt Lake City, UT
View the List

Alex Gilvarry's ambitious second novel, Eastman Was Here, will be on sale in August 2017.

Alex Gilvarry's widely acclaimed first novel is the story of designer Boy Hernandez: Filipino immigrant, New York glamour junkie, Guantánamo detainee. Locked away indefinitely and accused of being linked to a terrorist plot, Boy prepares for the tribunal of his life with this intimate confession, a dazzling swirl of soirees, runways, and hipster romance that charts one small man's undying love for New York City and his pursuit of the big American dream—even as the present nightmare of detainment chisels away at his vital wit and chutzpah.

A New York Times Editor's Choice, From the Memoirs of a Non-Enemy Combatant unveils two of America's most illusory realms—high fashion and Homeland Security—in a funny, wise, and beguiling, and Kafkaesque tale for our strange times.

Praise For From the Memoirs of a Non-Enemy Combatant: A Novel…

“Lively . . . Hilarious . . . [This] whirligig of a book draws some striking parallels between the way we mythologize stars and the way we look at terrorists.”
—John Freeman, The Boston Globe

“It's rare for a novel to tread so fearlessly into the political and yet to emerge so deeply funny and humane. Gilvarry is a young talent on the rise. Watch him gallop through the mess we’ve made of our civilization with style and panache.”
—Gary Shteyngart, author of Super Sad True Love Story and Absurdistan

“The deepest intelligence is poetic, incisive and inordinately funny. Heads up, folks. Alex Gilvarry just walked through the door.”
—Colum McCann, author of Let the Great World Spin and Zoli

“Finally, a young American novelist who has the guts to confront the absurdity of the last decade. Gilvarry has given us a sly, hilarious, and wickedly insightful book about living in the United States (or trying to live in the U.S.) in the aftermath of September 11th. Fashion, terrorism, New York and Guantanamo Bay: in the hands of Gilvarry, hilarity ensues. A brilliant debut.”
—Michael Hastings, author of The Operators

Alex Gilvarry was born in Staten Island, New York in 1981. He is the author of From the Memoirs of a Non-Enemy Combatant, winner of the Hornblower Award for First Fiction and Best New Voice 2012 by Bookspan, and was selected by the New York Times as an Editor's Choice. His second novel, Eastman Was Here, will be published by Viking in August 2017. He is a National Book Foundation 5 Under 35 honoree and has received fellowships from the Harry Ransom Center and the Norman Mailer Center. His essays and criticism have appeared in The Nation, Boston Globe, NPR's All Things Considered, and many other publications. He is a professor at Monmouth University where he teaches fiction.
or
Not Currently Available for Direct Purchase