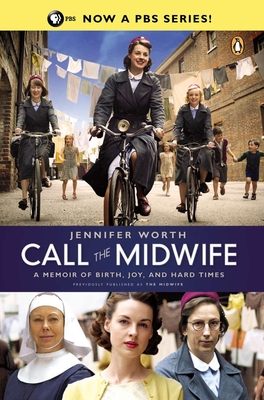 A Memoir of Birth, Joy, and Hard Times (The Midwife Trilogy #1)

The highest-rated drama in BBC history, Call the Midwife will delight fans of Downton Abbey

Viewers everywhere have fallen in love with this candid look at post-war London. In the 1950s, twenty-two-year-old Jenny Lee leaves her comfortable home to move into a convent and become a midwife in London's East End slums. While delivering babies all over the city, Jenny encounters a colorful cast of women—from the plucky, warm-hearted nuns with whom she lives, to the woman with twenty-four children who can't speak English, to the prostitutes of the city's seedier side.

An unfortgettable story of motherhood, the bravery of a community, and the strength of remarkable and inspiring women, Call the Midwife is the true story behind the beloved PBS series, which will soon return for its sixth season.

Praise For Call the Midwife: A Memoir of Birth, Joy, and Hard Times (The Midwife Trilogy #1)…

"Jennifer Worth's memories of her years as a midwife were at once hilarious and tremendously moving." -Ayelet Waldman, author of Love and Other Impossible Pursuits

"Worth is indeed a natural storyteller. . . . Her detailed account of being a midwife in London's East End is gripping, moving, and convincing from beginning to end." -Literary Review

"I loved the people, the nuns, the tough dockers, the prostitutes and pimps, seen with the fresh eyes of youth." -The Guardian

"Readers will fall in love with Call the Midwife . . . an affirmation of life during the best and worst of times." -Elizabeth Brundage, author of The Doctor's Wife

Jennifer Worth trained as a nurse at the Royal Berkshire Hospital in Reading. She then moved to London to train as a midwife. She later became a staff nurse at the Royal London Hospital, Whitechapel, and then ward sister and sister at the Elizabeth Garrett Anderson Hospital in Euston. Music had always been her passion, and in 1973 Jennifer left nursing in order to study music intensively, gaining the Licentiate of the London College of Music in 1974 and a Fellowship ten years later. Jennifer married Philip Worth in 1963 and they lived together in Hertfordshire. She died in May 2011, leaving her husband, two daughters and three grandchildren. Her memoirs are the basis for the popular TV series Call the Midwife.
Loading...
or support indie stores by buying on