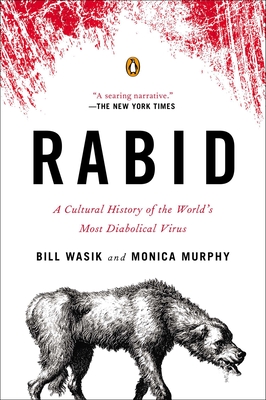 The most fatal virus known to science, rabies-a disease that spreads avidly from animals to humans-kills nearly one hundred percent of its victims once the infection takes root in the brain. In this critically acclaimed exploration, journalist Bill Wasik and veterinarian Monica Murphy chart four thousand years of the history, science, and cultural mythology of rabies. From Greek myths to zombie flicks, from the laboratory heroics of Louis Pasteur to the contemporary search for a lifesaving treatment, Rabid is a fresh and often wildly entertaining look at one of humankind's oldest and most fearsome foes. "A searing narrative." -The New York Times "In this keen and exceptionally well-written book, rife with surprises, narrative suspense and a steady flow of expansive insights, 'the world's most diabolical virus' conquers the unsuspecting reader's imaginative nervous system. . . . A smart, unsettling, and strangely stirring piece of work." -San Francisco Chronicle "Fascinating. . . . Wasik and Murphy chronicle more than two millennia of myths and discoveries about rabies and the animals that transmit it, including dogs, bats and raccoons." -The Wall Street Journal

Praise For Rabid: A Cultural History of the World's Most Diabolical Virus…