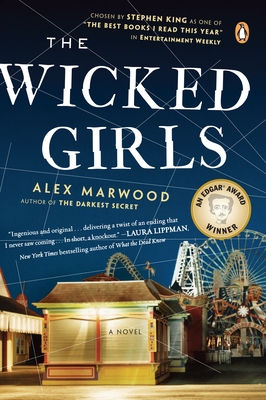 “The suspense keeps the pages flying, but what sets this one apart is the palpable sense of onrushing doom.” —Stephen King, “The Best Books I Read This Year”

The Edgar Award-winning psychological thriller that asks the question: how well can you truly know anyone?

On a fateful summer morning in 1986, two eleven-year-old girls meet for the first time. By the end of the day, they will both be charged with murder. Twenty-five years later, journalist Kirsty Lindsay is reporting on a series of sickening attacks on young female tourists in a seaside vacation town when her investigation leads her to interview carnival cleaner Amber Gordon. For Kirsty and Amber, it’s the first time they’ve seen each other since that dark day so many years ago. Now with new, vastly different lives—and unknowing families to protect—will they really be able to keep their wicked secret hidden?

Gripping and fast-paced, with an ending that will stay with you long after you’ve read it, The Wicked Girls takes you to a thrillingly dark place you’ve never been before. For fans of Gillian Flynn, Liane Moriarty, and Tana French.

“The Wicked Girls is ingenious and original. Real, chilling, true to its world and its characters. In short, a knock-out.” —Laura Lippman, New York Times bestselling author of And When She Was Good and What the Dead Know


Praise For The Wicked Girls: A Novel…

“The suspense keeps the pages flying, but what sets this one apart is the palpable sense of onrushing doom.”
—Stephen King, “The Best Books I Read This Year,” Entertainment Weekly

“Harrowing. . . . While the received wisdom on violence committed by children seems to be that ‘some people just are born evil,’ Marwood makes a strong case that these crimes are more likely rooted in poverty, abuse and parental abandonment.”
—Marilyn Stasio, The New York Times Book Review

“The swirling mass of perceptions and happenings behind the main drama of Kirsty and Amber’s past crime is what makes The Wicked Girls more than a plot-driven mystery novel. (Not that it isn’t also that; Marwood sacrifices no speed, no engaging details or cliffhangers for the sake of the book’s spiky undercurrent.)”
—The Rumpus

“In addition to being an excellent intelligent dark thriller in the vein of Gillian Flynn, The Wicked Girls presents an intriguing insider’s account of salacious British tabloid journalism.”
—BoingBoing

“[Alex] Marwood is equally at home with terrifying, potentially violent scenes and quieter ones revealing the tensions of work and family life. She is also adept at depicting the subtle and not so subtle ways differences in class shape the lives of the girls and the women they’ve become.”
—Columbus Dispatch

“If Tana French and Gillian Flynn stayed up all night telling stories at an abandoned amusement park, this is awfully close to what they might come up with.”
—Booklist (starred review)

“The Wicked Girls is ingenious and original—a novel that surprises and rewards its readers, delivering a twist of an ending that I never saw coming, then realized it was the only ending that could truly satisfy. Real, chilling, true to its world and its characters. In short, a knock-out.”
—Laura Lippman, New York Times bestselling author of And When She Was Good and What the Dead Know

“The Wicked Girls is utterly compelling. It’s psychologically rich, complex and masterfully plotted. I couldn't put it down, even when I sensed it was taking me somewhere very dark indeed. I can't wait to see what Alex Marwood comes up with next.”
—Jojo Moyes, New York Times bestselling author of Me Before You and After You

Alex Marwood is the pseudonym of a journalist who has worked extensively across the British press. Her first novel, The Wicked Girls, won the Edgar Award for Best Paperback Original, and was nominated for the Macavity Award for Best Mystery Novel and the Anthony and ITW Awards for Best Paperback Original. The Killer Next Door, her second novel, won a Macavity Award for Best Mystery Novel, was nominated for the Anthony and Barry, and has been optioned for film by James Franco and Ahna O’Reilly. Her third novel, The Darkest Secret, was published in 2016. Marwood lives in south London.

Bel and Jade were convicted of committing murder when they were eleven–years–old. Do you think the fact that they once killed predisposes them to kill again? Did your opinion change over the course of the novel?

In most cases, do you believe that an eleven–year–old understands the concept of murder? How should the state handle a pre–teen who’s killed?

How much of your eleven–year–old self do you remember or recognize in who you are today?

Early on in The Wicked Girls, Stan tells Kirsty about a story he’s covering about two twelve–year–old boys who bullied another boy to his death. How does this set the stage for Bel and Jade’s crime?

Do you generally accept the media’s representation of an individual—particularly the suspect in a crime—at face value?

What responsibility does the media have to uphold our legal concept of “innocent until proven guilty”?

If you were trying to bury your past, how would you go about recreating a new life and identity?

Rather than frightening away tourists, news of the Whitmouth strangler brings the town bigger crowds than normal. Have you ever been tempted to visit the scene of a crime? If so, what was its allure?

Did you realize that Amber was Bel and Kirsty was Jade before the novel revealed their original identities? If so, what gave it away?

Ultimately, was either Bel or Jade more responsible for Chloe’s death? Now that you know the circumstances surrounding Chloe’s death, what punishment would you mete out—and to whom?

Class is often perceived as the white elephant in British culture—a hulking presence that many prefer to ignore. But class plays a huge role in the novel. Why does it seem to give us an extra frisson of pleasure when someone from the wealthy upper classes commits a crime? How might things have transpired differently if Bel had gone to Exmouth and Jade to Blackdown Hills?