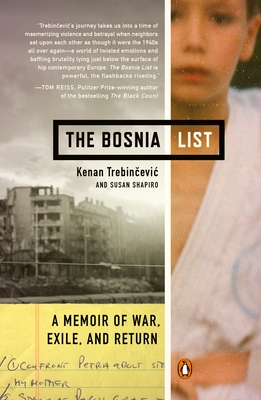 A Memoir of War, Exile, and Return

A young survivor of the Bosnian War returns to his homeland to confront the people who betrayed his family. The story behind the YA novel World in Between: Based on a True Refugee Story.

At age eleven, Kenan Trebincevic was a happy, karate-loving kid living with his family in the quiet Eastern European town of Brcko. Then, in the spring of 1992, war broke out and his friends, neighbors and teammates all turned on him. Pero - Kenan's beloved karate coach - showed up at his door with an AK-47 - screaming: "You have one hour to leave or be killed!" Kenan’s only crime: he was Muslim. This poignant, searing memoir chronicles Kenan’s miraculous escape from the brutal ethnic cleansing campaign that swept the former Yugoslavia. After two decades in the United States, Kenan honors his father’s wish to visit their homeland, making a list of what he wants to do there. Kenan decides to confront the former next door neighbor who stole from his mother, see the concentration camp where his Dad and brother were imprisoned and stand on the grave of his first betrayer to make sure he’s really dead. Back in the land of his birth, Kenan finds something more powerful—and shocking—than revenge.

Praise For The Bosnia List: A Memoir of War, Exile, and Return…

“The great instruction of this important work is the author’s moral transformation that helped him replace hate with grace, if not forgiveness.”
—Publishers Weekly

“A mesmerizing tale of survival and healing.”
—Booklist

“An engaging memoir of war trauma and the redemption to be found in confronting it.”
—Kirkus

“A young New Yorker haunted by searing memories goes on a most unusual overseas vacation—not to sightsee or party but to confront the ordinary men and women who tore his family’s lives apart. His journey takes us into a time of mesmerizing violence and betrayal when neighbors set upon each other as though it were the 1940s all over again—a world of twisted emotions and baffling brutality lying just below the surface of his contemporary Europe. THE BOSNIA LIST is powerful, the flashbacks riveting.”
—Tom Reiss, bestselling author of The Black Count and The Orientalist

“With understated elegance and in highly personal pointillist dots, Kenan Trebincevic illuminates how the Bosnian tragedy blighted, and continues to blight, the lives of countless people both in his homeland and in its far-flung diaspora. This important and original work reminds us, in ways large and small, of the long half-life of an atrocity.”
—David Margolick, bestselling author of Elizabeth and Hazel and Strange Fruit

“Kenan Trebincevic fights against the power of memory and his own rage in this remembrance of a time that seems like a medieval anachronism yet was barely a decade ago. This is a searing memoir of war and peace from a young man who sees through ancient rhetoric with stunning clarity, both in his home country and his adopted United States. Read this book for its impassioned honesty.”
—Tom Zoellner, bestselling author of A Safeway in Arizona

“I’m so blown away by this beautiful book.  For the first time, a young Bosnian tells a riveting coming-of-age story about the brutal Balkan war when parents disappeared into concentration camps, teachers turned on students and children betrayed children.
Two decades later, now an American citizen, Kenan returns to his homeland to confront the guilty and honor the dead in this passionate, nuanced account of a man who refuses to forget.”
—Julia Lieblich, author of Sisters: Lives of Devotion and Defiance

“Kenan Trebincevic’s story of survival and remembrance is moving, well-told, and important for all of us to hear. He makes a powerful case for courage and human decency as the only way through the divisive madness of modern life.”
—Ian Frazier, bestselling author of Travels in Siberia and Great Plains

“THE BOSNIA LIST tells a fascinating story of a harrowing and heart-rending journey. It’s a graceful, taut memoir of family, friends and faith: a moving recollection of souls being torn asunder and slowly beginning to heal.”
—Laurence Bergreen, bestselling author of Columbus: The Four Journeys

“THE BOSNIA LIST was difficult to finish because it touched me so deeply. I’ve wondered how another Bosniak could describe their tragedy and traumas, watching the transformation of former friends and neighbors becoming animals. Most powerful was how Kenan’s mother’s voice echoed in his head and became his morality, preventing him from getting revenge. She’s one of the strongest, best described female characters in Bosnian literature. And I was rooting for Kenan’s father not to succumb to evil and stay a good man. That might be why his family survived. That shows us all: if we stay good, we have a chance.”
—Dr. Esad Boskailo, Bosnian war survivor and co-author of Wounded I Am More Awake

Kenan Trebincevic immigrated to America in 1993 and became a citizen in 2001. His writing has appeared in the New York Times Magazine and Op-Ed page, the Wall Street Journal, Salon, and The Best American Travel Writing 2012 and on American Public Radio and NPR.

Susan Shapiro teaches journalism at New York University and the New School. Her work has appeared in the New York Times, the Washington Post, Los Angeles Times, and the Nation.  She is the author of eight books, including the memoir Five Men Who Broke My Heart, which is currently optioned for film.
Loading...
or
Not Currently Available for Direct Purchase