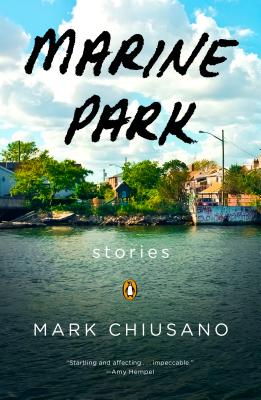 “Chiusano . . . [has] formidable talents. It will be worth watching what he does when he leaves the neighborhood.”—John Williams, The New York Times

An astute, lively, and heartfelt debut story collection by an exciting new voice in contemporary fiction

Marine Park—in the far reaches of Brooklyn, train-less and tourist-free—finds its literary chronicler in Mark Chiusano. Chiusano’s dazzling stories delve into family, boyhood, sports, drugs, love, and all the weird quirks of growing up in a tight-knit community on the edge of the city. In the tradition of Junot Díaz’s Drown, Stuart Dybek’s The Coast of Chicago, and Russell Banks’s Trailerpark, this is a poignant and piercing collection—announcing the arrival of a distinct new voice in American fiction.

“The stories in Mark Chiusano’s debut collection all have links to Marine Park, a part of southern Brooklyn far removed from the gentrifying hordes. . . . Those that range more widely, either thematically or geographically — including one about a retiree who gets into trouble running a shady errand and another set in Los Alamos, N.M., during the Manhattan Project — showcase Mr. Chiusano’s more formidable talents. It will be worth watching what he does when he leaves the neighborhood.”
—John Williams, The New York Times

“Mark Chiusano’s debut collection, Marine Park, homes in on the Brooklyn neighborhood of the title, where the 23-year-old author grew up, offering sparkling and concise linked stories about coming of age hard by some salt marshes, where backyards are boat docks and ball fields are showcases.”
—Elle

“Absolute genius . . . Marine Park . . . has every anecdote of life in an all-American community, from family to sports to drugs. . . . Filled with life stories we can all relate to. . . . [Chiusano] makes it seem like you’re hearing these stories from an old friend at a bar, venting about his life, his regrets and his lost dreams, over a couple of drinks. Stories that are short, entertaining and explosive. Stories that will elicit at least one, if not many, memories and experiences from your life and that makes reading Marine Park totally worth it.”
—The Boston Herald

“Chiusano gives a voice to the lesser-known Brooklyn neighborhood of Marine Park in his collection of interconnected stories that unearth broader truths among quotidian events, from haircuts to train rides.”
—The Huffington Post

“Astonishingly good . . . Marine Park feels like you’re reading an experimental version of the Great American Novel–like the slim volume was once an 800-page behemoth that has been cut down to its elemental moments . . . vivid, emotionally rich . . . the sheer range of human experience and emotional depth that [Chiusano] reaches in this debut reminds me of readingWhite Teeth, the incredibly precocious novel that Zadie Smith wrote while in her final year at Cambridge.”
—Brooklyn Based

“[A] promising debut collection . . .  23-year-old Chiusano revisits his native Brooklyn—specifically, Marine Park. The neighborhood, distinguished by its salt marshes, canals, and large waterfront park, serves as the collection’s focal point, bringing together a multigenerational cast of characters. They include a scientist who worked on the Manhattan Project in “Shatter the Trees and Blow Them Away”; an ex-high school basketball star turned gun-toting drug dealer in “Ed Monahan’s Game”; and the brothers Jamison and Lorris Favero, whom we follow from adolescence in the early 2000s to adulthood in the present, in eight of the stories. In two of them, “Heavy Lifting” and “Open Your Eyes,” Chiusano is at his best, carefully delineating sibling relationships and building tension.”
—Publishers Weekly

“From slice-of-life tales to hair-raising thrillers to traditional relationship dramas. . . . Chiusano’s debut collection takes readers along the streets and through the history of an isolated Brooklyn neighborhood, portraying everyday people who call Marine Park home. . . . Chiusano’s impressive prose and topical range suggest the onset of a promising literary career worth keeping an eye on.”
—Booklist

“In clean, honed prose, Mark Chiusano gives us an intimate tour of a neighborhood of Brooklyn not offered up in fiction before.  His explorations of loyalty within a family, and the breach of it, are startling and affecting—his sense of story is impeccable.  Marine Park is a debut worth a reader’s close attention.”
—Amy Hempel, author of The Collected Stories of Amy Hempel

“The stories in Marine Park are funny and touching and elliptical, and all about coming of age at the edge of the city and on the margins of the good life, with some moving forward and others left behind. Mark Chiusano is wonderful on how our minds can be elsewhere even when we wish to be wholly present, and on the oblique ways in which we therefore often have to signal our indispensability to one another.”
—Jim Shepard, author of You Think That's Bad

“One of the most subtle, tender, emotionally powerful books that I’ve read in a long time. Set mostly in Brooklyn, but its subject is the whole of America. If you’ve never been to Marine Park before, by the end of this collection you’ll feel like you’d lived there your whole life. This is a stunning debut.”
—Saïd Sayrafiezadeh, author of When Skateboards Will Be Free and Brief Encounters with the Enemy

“Here’s the spirit of dear Sherwood Anderson in Mark Chiusano’s Marine Park, another village brimming with all of the odd drama of families and loners. There is something a little old and wise in this talented writer’s debut. At times the stories read like the news, letters from a friend, and at times the tales seem elegiac glimpses of a lost world. Mr. Chiusano is writing family from the inside out and he makes this world an aching bittersweet pleasure. Here is the kind of affectionate particularity which marks a fine writer.”
—Ron Carlson, author of Return to Oakpine

“In Marine Park, Mark Chiusano shines a light on lives that are too often left in the dark.  He shows us, with humor and deep-hearted compassion, the complexities of growing up and growing old in the blue collar shadows, and he gives us, story after story, the chance to see ourselves in his longing, hopeful characters. This is a wise and affecting collection, and it marks the arrival of a voice we’ve not heard until now, one that will carry through the streets and alleys of contemporary literature for years to come.”
—Bret Anthony Johnston, author of Remember Me Like This

Mark Chiusano is the author of Marine Park, which received an honorable mention for the PEN/Hemingway Award. His fiction and essays have appeared in Guernica, Narrative Magazine, Five Chapters, Harvard Review, and online at Tin House, NPR, The Atlantic, and The Paris Review, among other places. He was born and raised in Brooklyn. Find him at markchiusano.com or @mjchiusano.
Loading...
or
Not Currently Available for Direct Purchase