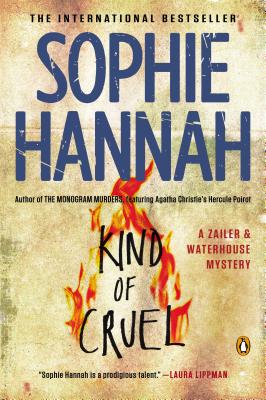 Brilliantly executed psychological suspense (Booklist, starred review) from the bestselling author of The Wrong Mother
When Amber Hewerdine consults a hypnotherapist as a desperate last resort, she doesn't expect that anything much will change.
She doesn't expect it to help with her chronic insomnia.
She doesn't expect to hear herself, under hypnosis, saying words that mean nothing to her: 'Kind, cruel, kind of cruel' - words she has seen somewhere before, if only she could remember where.
She doesn't expect to be arrested two hours later, as a result of having spoken those words out loud, in connection with the brutal murder of Katharine Allen, a woman she's never heard of . . .
Kind of Cruel is the 7th book in Hannah's acclaimed Zailer & Waterhouse series. Charlie and Simon have just gotten married, but domestic bliss is proving rather illusive, not least because Charlie ends up in Simon's investigation as a witness. Charlie's sister Liv is still sleeping with Gibbs, making Simon's work life complicated and irritating Charlie to no end. And Simon's boss and adversary, The Snowman, is still being generally horrible. Featuring all the Spilling PD characters fans know and love, Sophie Hannah's trademark dark, twisty plot will keep readers guessing until the very end.


Praise For Kind of Cruel…

Praise for Kind of Cruel

“Kind of Cruel is meticulously constructed, its characters are memorable, and its tone delicately balances the book’s deadly serious (and not for the faint of heart) storyline against some unexpected humor.” – The Seattle Times

“Calling this plot serpentine doesn’t do it justice.” – The Toronto Star

“This is [a] brilliantly executed psychological suspense with a complex plot brought to a horribly logical conclusion.” – Booklist (starred review)

“Kind of Cruel is a top-notch psychological thriller that will provide many sleepless nights of reading for those who venture in.” – Bookreporter

“Nearly impossible to unravel until its final pages, Hannah’s intricate, multi-voice narrative explores the elusive, malleable nature of memory as played out in a baffling criminal investigation involving some odd remembered words and the brutal death of a stranger.” – Brooklyn Daily Eagle

“An exploration of memory and the way trauma lives on in the present. Cool, calculating and utterly chilling, Kind of Cruel is another compulsive book from Hannah, to be gulped down with all the lights on and someone to grab when the sense of menace grows too great.” – The Observer (London)

“[Hannah] has outdone herself with Kind Of Cruel…Her trademark precision-layered structure creates a multi-dimensional maze that holds at its centre a revelation which is truly hair-raising, even by Hannah's standards.” – Independent on Sunday (London)

“An audacious puzzle of a novel that is impossible to second guess. There are clues on virtually every page but only when you reach the final chapter does it become apparent how they slot together….Crime novels are often dismissed in literary circles for not being literary enough. Yet Kind Of Cruel is exactly the intelligent, reflective and stunningly written novel that has “literary” critics swooning and judging panels lining up to reward. The fact that it has a police investigation at its heart is a plus, not a minus, and makes for one hell of a journey.” – Sunday Express (London)

Sophie Hannah is the bestselling author ofnine novels and is also an award-winning poet. Her Hercule Poirot mystery, the first to be sanctioned by the Agatha Christie estate, was published in 2014. She lives in Cambridge, England, with her husband and two children, and is a Fellow Commoner at Lucy Cavendish College."
Loading...
or
Not Currently Available for Direct Purchase