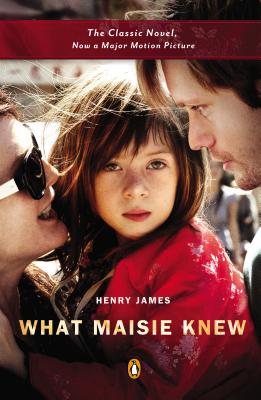 The inspiration for a new film starring Julianne Moore, Alexander Skarsgard, Steve Coogan, and Onata Aprile
After her parents' bitter divorce, young Maisie Farange finds herself shuttled between her selfish mother and vain father, who value her only as a means for provoking each other. Maisie--solitary, observant, and wise beyond her years--is drawn into an increasingly entangled adult world of intrigue and sexual betrayal until she is finally compelled to choose her own future. Published in 1897 as Henry James was experimenting with narrative technique and fascinated by the idea of the child's-eye view, "What Maisie Knew" is a subtle yet devastating portrayal of an innocent adrift in a corrupt society.

HENRY JAMES (1843 1916), born in New York City, was the son of noted religious philosopher Henry James, Sr., and brother of eminent psychologist and philosopher William James. He spent his early life in America and studied in Geneva, London and Paris during his adolescence to gain the worldly experience so prized by his father. He lived in Newport, went briefly to Harvard Law School, and in 1864 began to contribute both criticism and tales to magazines.

During his career he also wrote many works of criticism and travel. Although old and ailing, he threw himself into war work in 1914, and in 1915, a few months before his death, he became a British subject. In 1916 King George V conferred the Order of Merit on him. He died in London in February 1916."
or
Not Currently Available for Direct Purchase
Copyright © 2020 American Booksellers Association