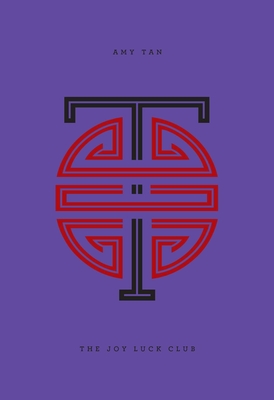 It all begins with a letter. Fall in love with Penguin Drop Caps, a new series of twenty-six collectible and hardcover editions, each with a type cover showcasing a gorgeously illustrated letter of the alphabet. In a design collaboration between Jessica Hische and Penguin Art Director Paul Buckley, the series features unique cover art by Hische, a superstar in the world of type design and illustration, whose work has appeared everywhere from Tiffany & Co. to Wes Anderson's recent film Moonrise Kingdom to Penguin's own bestsellers Committed and Rules of Civility. With exclusive designs that have never before appeared on Hische's hugely popular Daily Drop Cap blog, the Penguin Drop Caps series debuted with an 'A' for Jane Austen's Pride and Prejudice, a 'B' for Charlotte Brönte's Jane Eyre, and a 'C' for Willa Cather's My Ántonia. It continues with more perennial classics, perfect to give as elegant gifts or to showcase on your own shelves.

T is for Tan. In 1949 four Chinese women, recent immigrants to San Francisco, begin meeting to eat dim sum, play mahjong, and talk. United in shared unspeakable loss and hope, they call themselves the Joy Luck Club. With wit and sensitivity, Amy Tan examines the sometimes painful, often tender, and always deep connection between these four women and their American-born daughters. As each woman reveals her secrets, trying to unravel the truth about her life, the strings become more tangled, more entwined.

"Honest, moving, and beautifully courageous. Amy Tan shows us China, Chinese-American women and their families, and the mystery of the mother-daughter bond in ways that we have not experienced before."
—Alice Walker

"Tracing the poignant destinies of two generations of tough, intelligent women, each gorgeously written page welcomes the reader and leads to an enlightenment that, like all true wisdom, sometimes brings pleasure and sometimes sadness."
—Chicago Tribune

“Reading it really changed the way I thought about Asian-American history. Our heritage has a lot of difficult stuff in it — a lot of misogyny, a lot of fear and rage and death. It showed me a past that reached beyond borders and languages and cultures to bring together these disparate elements of who we are. I hadn’t seen our history like that before. At that time, we hadn’t seen a lot of Asian-American representations anywhere, so it was a big deal that it even existed. It made me feel validated and seen. That’s what’s so important about books like that. You feel like, Oh my god, I exist here. I exist in this landscape of literature and memoir. I’m here, and I have a story to tell, and it’s among the canon of Asian-American stories that are feminist and that are true to our being. It’s a book that has stayed with me and lived in me.”
—Margaret Cho

AMY TAN is the author of The Joy Luck Club, The Kitchen God’s Wife, The Hundred Secret Senses, The Bonesetter's Daughter, and Saving Fish from Drowning, all New York Times bestsellers. She has published two children’s books, The Moon Lady and The Chinese Siamese Cat and a memoir, The Opposite of Fate. She was the co- producer and co-screenwriter of the film version of The Joy Luck Club. Her essays and stories have appeared in numerous magazines and anthologies and her work has been translated into thirty-five languages.

JESSICA HISCHE is a letterer, illustrator, typographer, and web designer. She currently serves on the Type Directors Club board of directors, has been named a Forbes Magazine "30 under 30" in art and design as well as an ADC Young Gun and one of Print Magazine’s "New Visual Artists". She has designed for Wes Anderson, McSweeney's, Tiffany & Co., Penguin Books and many others. She resides primarily in San Francisco, occasionally in Brooklyn.
Loading...
or
Not Currently Available for Direct Purchase