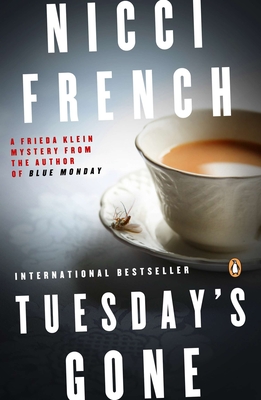 On a routine home visit, a London social worker discovers her psychotic client serving tea to a naked, decomposing corpse. Unable to make sense of the woman’s confused ramblings, Detective Chief Inspector Karlsson asks Frieda Klein for help uncovering the dead man’s identity. Frieda soon learns that he was a notorious con man—one Robert Poole. But Frieda can’t help feeling that Poole was killed to embroil her in the investigation, that her past isn’t done with her yet. And if so, is Frieda herself the next victim?

"Tuesday’s Gone is one of those great, great books in the mystery genre wherein the more you know, the less you know—peel back one stratum and you cannot shovel fast enough to get into the next, which reveals anything but what you expected. French takes the novel on a number of unexpected twists and turns, not the least of which relates back to BLUE MONDAY, which, as it turns out, didn’t quite end on its last page."
—Bookreporter.com

Nicci French is the pseudonym for the internationally bestselling writing partnership of suspense writers Nicci Gerrard and Sean French. The duo has sold more than eight million copies of their books worldwide. Their novels include Blue Monday, Tuesday's Gone, and Waiting for Wednesday. They are married and live in Suffolk and London, England.
Loading...
or support indie stores by buying on
(This book is on backorder)