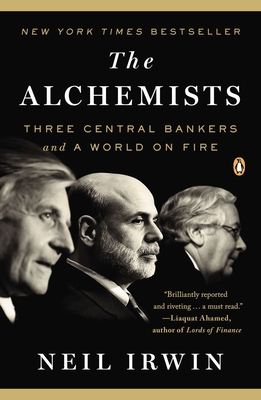 Suddenly, without warning, in August 2007, three men who had never been elected to public office found themselves the most powerful people in the world. They were the leaders of the world’s three most important central banks: Ben Bernanke of the U.S. Federal Reserve, Mervyn King of the Bank of England, and Jean-Claude Trichet of the European Central Bank. In The Alchemists, Washington Post reporter Neil Irwin presents the truly global story of the central bankers’ role in the world economy that we have been missing. Definitive, revelatory, and riveting, it shows us where money comes from—and where it may well be going.

Praise For The Alchemists: Three Central Bankers and a World on Fire…

The New York Times:
"[Mr. Irwin] has provided an accessible, engrossing account of the tribulations that Mr. Bernanke, with Mervyn A. King of the Bank of England and Jean-Claude Trichet of the European Central Bank, endured in pulling the world financial system back from collapse... Mr. Irwin seems to have talked with everyone, read the right scholarly papers and interviewed important dissenters in the Fed, the European Central Bank, the Bank of England and the Bundesbank... He has a nice touch for translating central banking’s mysteries, opaque and forbidding, into understandable English. He is astute in describing the internal and external politics of institutions traditionally expected to remain above politics of the usual sort."

Adam S. Posen, Foreign Affairs, President of the Peterson Institute for International Economics and member of the Bank of England’s Monetary Policy Committee from 2009 to 2012:
"An excellent account...scrupulously reported and full of clear explanations of events and economic concepts....an incredibly valuable book for all economically concerned non-economists. As someone who knows well the three central bankers that the book features...I can attest that the narrative has more than just a ring of truth. It gets the individuals, the circumstances surrounding their decisions, and their motivations right and also presents them fairly. Irwin’s volume will have lasting value for a wide range of audiences, including students and elected officials, but it will make its greatest contribution as a corrective to the many unfounded or simply crazy ideas about monetary policymakers’ intentions and impact."

The Wall Street Journal:
"A detailed and fast-moving account of these perilous years. This is the crisis as told through emails, phone calls, meetings and one very fateful walk along the beach in Deauville, France."

Kirkus Reviews:
"The most complete and authoritative account to date of the response of the central bankers to the global financial crisis."

Neil Irwin is a Washington Post columnist and economics editor of the Post’s Wonkblog website. He lives in Washington, D.C.
Loading...
or
Not Currently Available for Direct Purchase