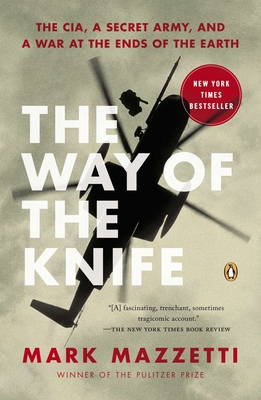 The Way of the Knife

The CIA, a Secret Army, and a War at the Ends of the Earth

“The new American way of war is here, but the debate about it has only just begun. In The Way of the Knife, Mr Mazzetti has made a valuable contribution to it.” —The Economist

A Pulitzer Prize–winning reporter’s riveting account of the transformation of the CIA and America’s special operations forces into man-hunting and killing machines in the world’s dark spaces: the new American way of war

The most momentous change in American warfare over the past decade has taken place away from the battlefields of Afghanistan and Iraq, in the corners of the world where large armies can’t go. The Way of the Knife is the untold story of that shadow war: a campaign that has blurred the lines between soldiers and spies and lowered the bar for waging war across the globe. America has pursued its enemies with killer drones and special operations troops; trained privateers for assassination missions and used them to set up clandestine spying networks; and relied on mercurial dictators, untrustworthy foreign intelligence services, and proxy armies.

This new approach to war has been embraced by Washington as a lower risk, lower cost alternative to the messy wars of occupation and has been championed as a clean and surgical way of conflict. But the knife has created enemies just as it has killed them. It has fomented resentments among allies, fueled instability, and created new weapons unbound by the normal rules of accountability during wartime.

Mark Mazzetti tracks an astonishing cast of characters on the ground in the shadow war, from a CIA officer dropped into the tribal areas to learn the hard way how the spy games in Pakistan are played to the chain-smoking Pentagon official running an off-the-books spy operation, from a Virginia socialite whom the Pentagon hired to gather intelligence about militants in Somalia to a CIA contractor imprisoned in Lahore after going off the leash.

At the heart of the book is the story of two proud and rival entities, the CIA and the American military, elbowing each other for supremacy. Sometimes, as with the raid that killed Osama bin Laden, their efforts have been perfectly coordinated. Other times, including the failed operations disclosed here for the first time, they have not. For better or worse, their struggles will define American national security in the years to come.

Praise For The Way of the Knife: The CIA, a Secret Army, and a War at the Ends of the Earth…

“The story of how the CIA got back into the killing business is as chilling and dramatic as a spy novel—except it’s true. Mark Mazzetti has laid out an extraordinary tale, tracking the spies as they track the terrorists. The Way of the Knife is as close as you'll ever get to the real thing.” —Dexter Filkins, author of The Forever War

“The Way of the Knife provides a stunning, inside account of the CIA's transformation after 9/11 from an intelligence agency into a global clandestine killing machine. Mazzetti, who is one of America's best national security reporters, has written a frightening, must-read book.” —Jane Mayer, staff writer, The New Yorker; author of The Dark Side: The Inside Story of How the War on Terror Turned Into a War on American Ideals

“The United States fought three wars after 9/11: Iraq, Afghanistan and the one in the shadows. This is an authoritative account of that that third war, conducted by the CIA and military Special Operators in Yemen, East Africa and, most of all, Pakistan. If you want to understand the world we live in, you need to read it.” —Thomas E. Ricks, author of Fiasco and The Generals

“The definitive history of how the intelligence agency became something much more like a paramilitary wing—de-evolving, in a sense, back to the days when the agency's adventurism influenced foreign policy around the world. It's a fascinating expose of what information the U.S. was not collecting—and how an attempt to fill the gap fell through oversight mechanisms and complicated geopolitics in Pakistan.” —The Week

“A highly engaging account that should please the curious and experts alike. Mazzetti manages to give a fresh reading to such oft-told stories as the bureaucratic jousting among White House, CIA and Pentagon officials over killer drones, secret prisons, ‘harsh interrogations’ and going global with military assassins.” —San Francisco Chronicle

“The new American way of war is here, but the debate about it has only just begun. In The Way of the Knife, Mr Mazzetti has made a valuable contribution to it.” —The Economist

“Essential background reading . . . there are many signs that the novel ‘military-intelligence complex’ that Mazzetti describes is becoming unacceptably controversial at home and abroad.” —The New Republic

“Mazzetti's is an assiduously compiled account that strings together some of the missing parts in the puzzle . . . The Way of the Knife is a tale full of intrigues.” —Dawn (Pakistan)

“An astounding tale that melds the immediacy of fiction with the authority of fact." —The Age (Australia)

“[A] deeply reported and crisply written account . . . While The Way of the Knife recounts the important shifts in the architecture of the U.S. military and intelligence communities, it also reveals the many eccentric characters who emerged during this.” —Washington Post

“Mazzetti finds new details and tracks the ominous blurring of traditional roles between soldiers and spies, the lush growth of a military-intelligence complex, and what the shift portends for the future . . . a valuable addition to a canon that is exposing America's use of lethal operations far from declared war zones.” —Los Angeles Times

“[A] fine account . . . Mazzetti describes in compelling detail the agency’s turf battles with the Pentagon, its awkward relations with its Pakistani counterpart, and its reliance on a motley collection of freelancers and private contractors.” —Foreign Affairs

“Pulitzer Prize-winning journalist Mark Mazzetti’s The Way of the Knife makes for an incisive guide to what he terms the 'shadow war' being waged in multiple countries around the world, away from prying eyes . . . [W]ith crisp, precision reporting, Mazzetti lays out a chronology of how one thing led to another after al-Qaeda’s asymmetric attacks in 2001 and the ruinously bloody and inconclusive invasions that followed exposed glaring weaknesses in both the American military and its intelligence services.” —Popmatters

“A well-reported, smoothly written book for anyone who wants to understand contemporary American military might and the widespread hatred for the U.S. that has been the result.” —Kirkus

Mark Mazzetti is a national security correspondent for the New York Times. He has received numerous awards, including the George Polk Award, and he shared a Pulitzer Prize for reporting. He lives in Washington, D.C.
Loading...
or support indie stores by buying on