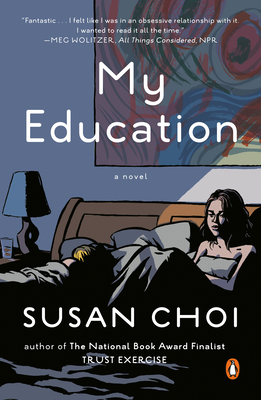 Regina Gottlieb had been warned about Professor Nicholas Brodeur long before arriving as a graduate student at his prestigious university high on a pastoral hill.  He’s said to lie in the dark in his office while undergraduate women read couplets to him. He’s condemned on the walls of the women’s restroom, and enjoys films by Roman Polanski. But no one has warned Regina about his exceptional physical beauty—or his charismatic, volatile wife.

Praise For My Education: A Novel…

Praise for My Education:

“The academic novel married to the novel of obsession is almost too pleasurable to contemplate, but that’s what this book is…Choi’s an extremely confident writer, and in My Education she beautifully explores the way a young person tries, and often fails, to navigate her budding and intersecting sexual, intellectual, and emotional lives.  The writing in this novel is masterful – but the book did something to me emotionally, too.  I felt like I was in an obsessive relationship with it.  I wanted to read it all the time.” —Meg Wolitzer, NPR.org

“An unsparing account of the carnal conspiracy between two gloriously human, difficult women . . . This novel was instrumental to my approach to [Luster], in the way it presents the desire of women (unvarnished, without apology) but also in its engagement with language and the way this lends itself to texture and sensuality.” —Raven Leilani, author of Luster

“Choi gets top marks for slyly re-inventing the affaire de l’Académie in My Education.” —Vanity Fair

“A fascinating examination of sexual politics and the many disguises of desire.” —The Daily Beast

“What Choi is after is the elusive territory of experience, the way people and events imprint us when we’re young and then linger, exerting a subtle pressure over how we live our lives.” —The Los Angeles Times

"Sizzling...a story filled with fiery love affairs, regrettable mistakes, and between-the-sheets scenes that blow 50 Shades of Grey out of the water." —Self

"My Education is a raw, wild, hurtling foray into the tangled realms of sexuality and self-knowledge. Susan Choi's vast gifts as a novelist are all on display, with her restlessness, curiosity and sheer daring leading the way." —Jennifer Egan, author of Manhattan Beach

“When I finished Susan Choi’s My Education, I nearly gasped. She had managed one of the most exquisite of the novelist’s magic acts—produced a cogent, passionate, and surprising story, while acknowledging the ordinary, eroding aspects of lives lived daily. She had populated it with remarkable but utterly believable characters.  She had written lines that could be framed, and displayed at a sentence festival.  She has, in short, written an amazing book.” —Michael Cunningham, author of The Hours

Susan Choi’s first novel, The Foreign Student, won the Asian-American Literary Award for fiction.  Her second novel, American Woman, was a finalist for the 2004 Pulitzer Prize for Fiction, and her third, A Person of Interest, a finalist for the 2009 PEN/Faulkner Award.  A recipient of fellowships from the NEA and the Guggenheim Foundation, in 2010 she received the PEN/W. G.Sebald Award.  She teaches at Princeton and lives in Brooklyn with her husband and sons.
Loading...
or support indie stores by buying on