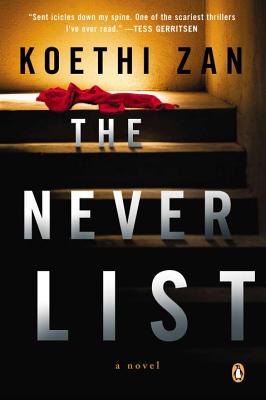 Psychological thriller writing at its best. Cancel appointments and give up on sleep. It's that kind of book. Jeffery Deaver
For years, Sarah Farber and her best friend, Jennifer, kept what they called the Never List: a list of actions to be avoided at all costs, for safety's sake. But one night, against their best instincts, they accept a cab ride one with grave, everlasting consequences. For the next three years, they are held captive with two other girls in a dungeon-like cellar by a connoisseur of sadism. Ten years later, Sarah's abductor is up for parole and she can no longer ignore the twisted letters he sends to her from prison. But when Sarah decides to confront her phobias and reconnect with the other survivors she begins unraveling a mystery more horrifying than even she could have imagined.
A blazingly fast read with eerie similarities to the recent kidnapping case in Cleveland, The Never List is a smart, riveting, and bold pageturner that will leave readers awake all night with the lights on.

Koethi Zanwas born and raised in rural Alabama, then moved to New York City after earning a J.D. from Yale Law School. She has practiced entertainment law for more than fifteen years, most recently at MTV. She now lives in upstate New York."
Loading...
or
Not Currently Available for Direct Purchase