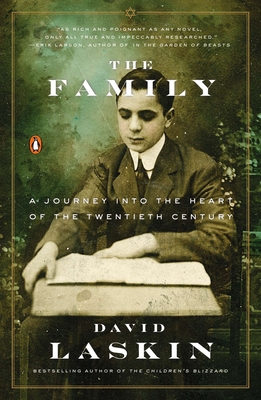 A Journey into the Heart of the Twentieth Century

In tracing the roots of this family—his own family—Laskin captures the epic sweep of the twentieth century. A modern-day scribe, Laskin honors the traditions, the lives, and the choices of his ancestors: revolutionaries and entrepreneurs, scholars and farmers, tycoons and truck drivers. The Family is a deeply personal, dramatic, and emotional account of people caught in a cataclysmic time in world history.

A century and a half ago, a Torah scribe and his wife raised six children in a yeshivatown at the western fringe of the Russian empire. Bound by their customs and ancient faith, the pious couple expected their sons and daughter to carry family traditions into future generations. But the social and political crises of our time decreed otherwise.

The torrent of history took the scribe’s family down three very different roads. One branch immigrated to America and founded the fabulously successful Maidenform Bra Company; another went to Palestine as pioneers and participated in the contentious birth of the state of Israel; the third branch remained in Europe and suffered the onslaught of the Nazi occupation.

With cinematic power and beauty, bestselling author David Laskin brings to life the upheavals of the twentieth century through the story of one family, three continents, two world wars, and the rise and fall of nations.

Praise For The Family: A Journey into the Heart of the Twentieth Century…

Praise for The Family

“The Family is as rich and poignant as any novel, only all true and impeccably researched.” —Erik Larson, New York Times bestselling author of In the Garden of the Beasts

“A true triumph of historical storytelling… David Laskin is a magical searcher into the past….His generations of Cohens could be your Johansens, Smiths, Lopezes, Schmidts, O’Houlihans, even my Scottish peasant forebears… The Family will touch you, heart and soul.” —Ivan Doig, National Book Award finalist for This House of Sky

“I read The Family without stopping, except sometimes to weep (and occasionally to chuckle). Through the stories of members of David Laskin’s large, dispersing family, history sharpens into individual lives and deaths and losses and becomes personal and vivid and tragic.” —Edith Pearlman, National Book Critics Circle Award winner and National Book Award finalist for Binocular Vision

“David Laskin’s The Family is a vivid, utterly compelling exploration of the forces that have shaped modern history.  We often view these forces— capitalism, fascism, mass migration, assimilation, and the like—only from a distance, as vast, impersonal abstractions. But in Laskin's magnificent book we see them in the intimate details of actual lives, deftly followed through a tangle of triumph, accommodation, and often unbearable suffering. An extraordinary achievement.” —Stephen Greenblatt, New York Times bestselling author of The Swerve: How the World Became Modern

“I was utterly entranced by David Laskin’s The Family. Tracing three strands of his fascinating ancestry, Laskin takes us on an epic journey deep into the heart and soul of the twentieth century. The story is haunting, heartfelt, and deeply moving. And in the end—as Laskin eloquently points out in a beautiful, almost mystical, epilogue—his telling of it weaves another bright silver thread into the fabric that binds all of us together.” —Daniel James Brown, author of The Boys in the Boat

“‘Fate and chance and character make and break every generation,’” David Laskin tells us in this
personal, highly moving history of his family. At once heartbreaking and gloriously triumphant, it’s finally a story of love. Yes, a big unyielding, often rollicking and humorous history of one generation’s prevailing love for the next. A wonderful achievement." —Philip Schultz, Pulitzer Prize-winning author of Failure

"David Laskin's The Family is an elegantly evocative meditation on the Jewish diaspora of the twentieth century. Deeply emotional at times, The Family is both harrowing and uplifting. Highly recommended!" —Douglas Brinkley, author of Cronkite.

“What a story! Scholars and scribes, Zionists and revolutionaries, Holocaust martyrs and the inventors of the Maidenform bra all march through these pages.  The Family is the twentieth-century history of the Jews writ small.” —Jonathan D. Sarna, Joseph H. and Belle R. Braun Professor of American Jewish History at Brandeis University

“A banquet of Jewish history, as lived by one exceptional American family, across four generations and on three continents, the worst things endured and the best things relished.” —Edward Ball, author of Slaves in the Family

"A fantastic book...This is a great, big-hearted book about how time and place modifies family, whatever or wherever its roots." —Amazon

“A metaphor of sorts for the 20th century, one in which incredible good fortune was granted to some and incomprehensible agony to others….No matter how many times the tale is told, it demands to be read.” —The Washington Post

“Laskin’s chronicle could have been written in tears…at once anguishing and inspiring.” —The Wall Street Journal

"[Laskin] make[s] history intimate by telling it through the eyes of ordinary people....Reads like a historical novel." —St. Louis Post-Dispatch

"[David Laskin] urges us to see the workings of history not merely as a list of dates, places and events, great men and great ideas, but as a tapestry whose threads include the lives of flesh-and-blood human beings… [He is] a storyteller who has given his own family chronicle all of the depth and detail of a great novel while, at the same time, honoring the truth of their lives.” —The Jewish Journal

David Laskin is the author of The Children’s Blizzard, which won the Washington State Book Award and Midwest Booksellers’ Choice Award for nonfiction. The author of several other works of nonfiction, Laskin writes for The New York Times and The Washington Post. He and his wife, the parents of three grown daughters, live in Seattle.
Loading...
or
Not Currently Available for Direct Purchase