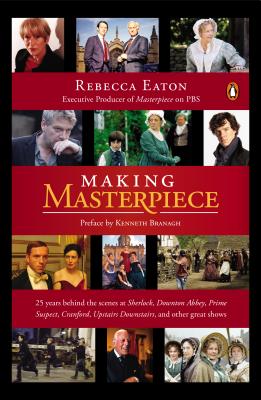 When Rebecca Eaton became the producer of Masterpiece Theatre in 1985, she hadn’t actually seen many of the episodes. Nor did she even like mystery novels, though she would be required to choose stories for Mystery! But the lifelong Anglophile seized her chance to make a mark in the budding public television system. Twenty-eight years later, Masterpiece is one of television’s hottest shows, and Eaton is responsible for its triumphant transition from the “quill-pen” era into the digital age.

Filled with anecdotes about (and the occasional interview with) the unforgettable hosts, the inspired creators, and the many talented actors she’s worked with over the years, Making Masterpiece is a compulsively readable treat for any fan of these beloved and iconic programs.

“[An] anecdote-filled memoir…Rebecca Eaton looks back on 25 fascinating years at Masterpiece Theatre and Mystery! at PBS.”—USA Today

“Eaton weaves an absorbing tale of what began as just a young girl’s Anglophilia but would eventually change the viewing habits of Americans…Though the book’s most compelling moments are culled from the battles Eaton waged as producer, she manages to put everything in perspective as a highly successful working mother who had plenty to fight for at home as well…. In the end, Eaton looks back with unflagging fondness at her life’s work and the spectrum of experiences it has brought her.”—Hollywood Reporter

“In addition to these sometimes charming, sometimes bawdy anecdotes, Eaton brings a strong personal element to the narrative…she is able to humanize what is sometimes seen as an impersonal area of the showbiz world…A pleasing blend of memoir and retrospective with a wide audience appeal. Recommended for readers interested in the history of television and the business aspects of the creative process and, of course, PBS devotees.”—Library Journal

“A delightful trek into the world of TV production and a substantive treat for the truly addicted PBS fan.”—Kirkus

“In the world of TV drama, names and faces appear and disappear with bewildering speed; Rebecca Eaton is immortal and immutable…She has made an enormous contribution to the cultural life of America, and, more than that, she is one of the most fun people I know.”
—Andrew Davies, Vanity Fair

“Rebecca has been the executive producer of Masterpiece for 25 of its 40 years. We Americans are fortunate to have Rebecca at the helm: someone committed to bringing great television drama to the widest possible audience, week after week.”—Gillian Anderson, The 2011 Time 100

Rebecca Eaton regards her decades-long stewardship of Masterpiece as the ideal job for the daughter of an English professor and an actress. She has been the executive producer of the show for twenty-eight of its forty-two years on the air. Awards on her watch include forty-three prime-time Emmy awards, fifteen Peabody awards, two Golden Globes, and two Academy Award nominations.

At Masterpiece Theatre and Mystery! she extended the programs' reach with contemporary dramas; initiated co-productions with the BBC (Middlemarch, The Buccaneers); co-produced feature films such as Jane Austen's Persuasion and Mrs. Brown starring Dame Judi Dench; and oversaw the rebranding of the series in 2008. Queen Elizabeth II awarded her an honorary OBE (Officer, Order of the British Empire) in 2003.

She lives in Cambridge, Massachusetts, and spends time at the family house in Kennebunkport, Maine.
Loading...
or support indie stores by buying on