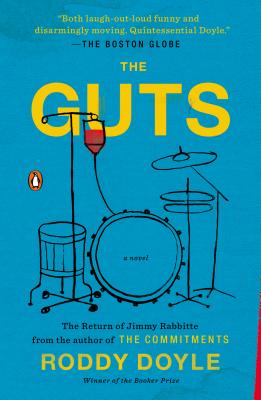 Full of the great joy in storytelling that characterizes Roddy Doyle’s novels, The Guts catches up with Jimmy Rabbitte—the man who in the 1980s formed the Commitments, a band composed of working-class Irish youths whose mission was to bring soul music to Dublin. Jimmy is now
forty-seven, with a loving wife, four kids . . . and colon cancer. The news leaves him shattered and frightened—he isn’t dying, he thinks, but he might be. As he battles his illness while running a small music business, he runs into former bandmates, reunites with his brother, and decides to live more in the moment. The Guts is a warm, funny novel about friendship and family, about facing death and opting for life.

RODDY DOYLE is the author of nine acclaimed novels; two short story collections; and Rory and Ita, a memoir about his parents. In 1993 he won the Booker Prize for his novel Paddy Clarke Ha Ha Ha. He lives in Dublin.

Praise For The Guts: A Novel…

"Doyle's Jimmy Rabbitte reappears, dealing with cancer, mortality, and love. . . . I was undone by the emotional clarity of the writing itself, and by the calm, but never static, way Doyle has of presenting a scene."
--The New York Times Book Review

"Quintessential Doyle. . . . both laugh-out-loud funny and disarmingly moving . . . [It] contains some of the snappiest, wittiest, most believable, and exhilarating dialogue in fiction. . . . To make a story about middle-aged men battling cancer a largely effervescent lark without a trace of sentimentality is a notable achievement."
--The Boston Globe

"Roddy Doyle is a great master of dialogue, which is his narrative medium-- the main way he tells. And it's impossible for anyone, I would think, not to laugh out loud at the wit and shock of it. . . . If [The Guts] has a unifying theme, it is the awareness of death, and the fresh perspective on life thrown by its advancing shadow."
--The New York Review of Books

"Doyle's collected works are a superlative study of family, aging, and the dignity of the working class--and his latest novel is a worthy addition. . . . The novel revisits an area Doyle explored previously in The Van: what it means to be a man at middle age."
--The Atlantic
or support indie stores by buying on
(This book is on backorder)
Copyright © 2020 American Booksellers Association