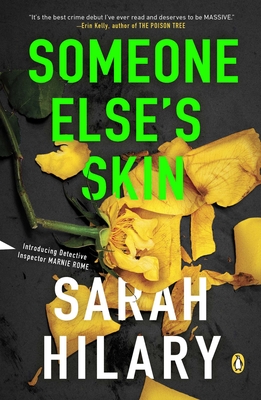 No two victims are alike.

DI Marnie Rome knows this better than most. Five years ago, her family home was the scene of a shocking and bloody crime that left her parents dead and her foster brother in prison. Marnie doesn’t talk much about her personal life, preferring to focus on work. Not even her partner, DS Noah Jake, knows much about Marnie’s past. Though as one of the few gay officers on the force and half Jamaican to boot, Noah’s not one to overshare about his private life either. Now Marnie and Noah are tackling a case of domestic violence, and a different brand of victim.

Hope Proctor stabbed her husband in desperate self-defense. A crowd of witnesses in the domestic violence shelter where she’s staying saw it happen, but none of them are telling quite the same story, and the simple question remains: how did Leo Proctor get in to the secure shelter? Marnie and Noah shouldn’t even have been there when it happened but they were interviewing another resident, Ayana Mirza. They’re trying to get Ayana to testify against her brothers for pouring bleach on her face for bringing dishonor the family, and blinding her in one eye. But Ayana knows that her brothers are looking for her, and she has no doubt that they’ll kill her this time.

As the violence spirals, engulfing the residents of the women's shelter, Marnie finds herself drawn into familiar territory: A place where the past casts long shadows and she must tread carefully to survive.

“Fans of Val McDermid and Ian Rankin will love this tremendous debut. Someone Else’s Skin puts Sarah Hilary and DI Marnie Rome squarely on the map. A gripping, disturbing examination of domestic violence with gravitas in spades, this book haunts you well after its finish.” – Julia Spencer-Fleming, New York Times bestselling author of Through Evil Days

“A truly engrossing read from an exceptional new talent. Hilary writes with a beguiling immediacy that pulls you straight into her world on the first page and leaves you bereft when you finish. Intelligent, emotional and totally unexpected in terms of where it goes. I truly loved this book” – Alex Marwood, author of  the Edgar Award-winning The Wicked Girls

“So brilliantly put together, unflinching without ever being gratuitous… and I love the way Sarah writes - every other page has a line I wish I'd thought of myself.  It’s the best crime debut I've ever read and deserves to be MASSIVE” – Erin Kelly, author of The Poison Tree

“If this first entry is anything to go by, Hilary's sense of plot and subtle character building will make the DI Marnie Rome series one to watch.” – ShelfAwareness

“Gripping and full of graphic details about the lives and psychology of her characters, both abusers and their victims. You might be surprised at the end to learn which is which.” – Mystery Scene

“What an entry on to the thriller scene Hilary has made with Someone Else’s Skin. She writes deftly, unobtrusively, subtly drawing her readers in… it’s the story that really drives this novel, though, and this is a corker: twisty, tricksy and, on occasion, seriously scary. This is an extraordinarily good debut.” – The Observer (London)

“Sarah Hilary’s impressive debut, Someone Else’s Skin, introduces Detective Inspector Marnie Rome, who is, I believe, unique among fictional cops in having had both her parents knifed to death by a teenager who lived with the family. The outwardly tough, inwardly mixed-up Rome visits a local women’s refuge with her colleague DS Noah Jake. As they walk in, they witness a resident viciously stabbing her tormentor husband. Later, she disappears with another woman from the refuge. The book’s central theme is domestic violence, which Hilary handles unflinchingly with force and passion. DI Rome is an appealing creation.” The Times (London)

“A tense, deep and dramatic tale of domestic violence.” – The Independent (London)

Sarah Hilary lives with her daughter in Bath, where she writes copy for a well-known travel publisher. She has also worked as a bookseller, and with the Royal navy. An award-winning short story writer, Sarah won the Cheshire Prize for Literature in 2012. SOMEONE ELSE'S SKIN is her first novel.
Loading...
or
Not Currently Available for Direct Purchase