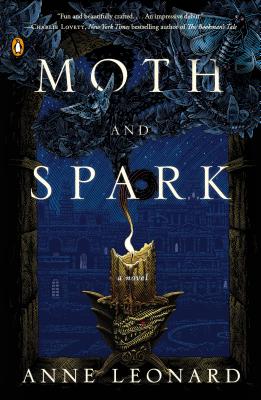 A prince with a quest, a beautiful commoner with mysterious powers, and dragons who demand to be freed at any cost
Filled with the potent mix of the supernatural and romance that made A Discovery of Witches a runaway success, Moth and Spark introduces readers to a vibrant world and a love story they won t soon forget.
Prince Corin has been chosen to free the dragons from their bondage to the power Mycenean Empire, but dragons aren t big on directions. They have given him some of their power, but none of their knowledge. No one, not the dragons nor their riders, is even sure what keeps the dragons in the Empire's control. Tam, sensible daughter of a well-respected doctor, had no idea before she arrived in Caithenor that she is a Seer, gifted with visions. When the two run into each other (quite literally) in the library, sparks fly and Corin impulsively asks Tam to dinner. But it's not all happily ever after. Never mind that the prince isn t allowed to marry a commoner: war is coming. Torn between his quest to free the dragons and his duty to his country, Tam and Corin must both figure out how to master their powers in order to save Caithen. With a little help from a village of secret wizards and rogue dragonrider, they just might pull it off.

Anne Leonard has degrees from St. John s College (B.A), the University of Pittsburgh (MFA), Kent State University (Ph.D), and the University of California, Hastings College of the Law. She lives in northern California with her husband, teenage son, and two black cats."
Loading...
or
Not Currently Available for Direct Purchase