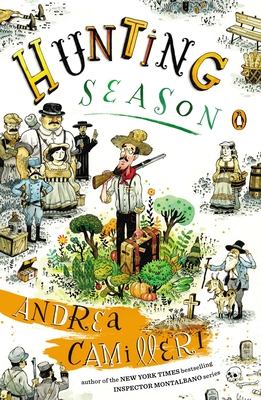 From internationally bestselling author Andrea Camilleri, a brilliant, bawdy comedy that will surprise even the most die-hard Montalbano fans

In 1880s Vigàta, a stranger comes to town to open a pharmacy. Fofò turns out to be the son of a man legendary for having a magic garden stocked with plants, fruits, and vegetables that could cure any ailment—a man who was found murdered years ago. Fofò escaped, but now has reappeared looking to make his fortune and soon finds himself mixed up in the dealings of a philandering local marchese set on producing an heir.

An absurd, quirky murder mystery that recalls the most hilarious and farcical scenes of Shakespeare and The Canterbury Tales, Hunting Season will introduce American readers to a refreshing new aspect of one of our best-loved writers.

Andrea Camilleri, a mega-bestseller in Italy and Germany, is the author of the New York Times-bestselling Inspector Montalbano mystery series, as well as historical novels which take place in nineteenth-century Siciliy, including Hunting Season. The Montalbano series has been translated into thirty-two languages and was adapted for Italian television. The Potter's Field, the thirteenth book in the series, was awarded the Crime Writers Association's International Dagger Award for the best crime novel translated into English, and was longlisted for the IMPAC Dublin Literary Award.

Praise For Hunting Season: A Novel…

“Entertaining and every so often moving....The comedy is broader, bawdier and darker in Hunting Season.”—The Wall Street Journal

“[A] bawdy little gem from the author of the Inspector Montalbano series.”—Publishers Weekly

“[Camilleri] turns his hand to historical fiction: the result is another success....It would take a saint not to crack a smile at the antics that take place in these pages.”—Library Journal

Praise for Andrea Camilleri and the Montalbano Series:

“Subtle, sardonic, and molto simpatico: Montalbano is the Latin re-creation of Philip Marlowe, working in a place that manages to be both more and less civilized than Chandler’s Los Angeles.”—Kirkus Reviews (starred)

“Wit and delicacy and the fast-cut timing of farce play across the surface…but what keeps it from frothing into mere intellectual charm is the persistent, often sexually bemused Montalbano, moving with ease along zigzags created for him, teasing out threads of discrepancy that unravel the whole.”—Houston Chronicle

“The Montalbano mysteries offer cose dolci to the world-lit lover hankering for a whodunit.”—The Village Voice

“In Sicily, where people do things as they please, Inspector Salvo Montalbano is a bona fide folk hero.”—The New York Times Book Review

“The books are full of sharp, precise characterizations and with subplots that make Montalbano endearingly human…Like the antipasti that Montalbano contentedly consumes, the stories are light and easily consumed, leaving one eager for the next course.”—New York Journal of Books

“The reading of these little gems is fast and fun every step of the way.”—The New York Sun

“This series is distinguished by Camilleri’s remarkable feel for tragicomedy, expertly mixing light and dark in the course of producing novels that are both comforting and disturbing.”—Booklist
or
Buy Here
Copyright © 2020 American Booksellers Association