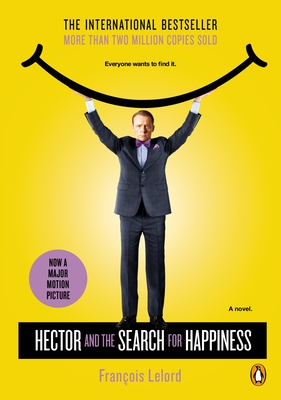 Hector and the Search for Happiness (Movie Tie-In)

“Hector is an unassuming psychiatrist quite set in his ways but longs for something more. He wants to answer the question 'What is happiness?'. His search takes him all over the globe where he discovers that there may be more to being happy than he ever realized and what happiness means to different people, different cultures. I loved this book, I loved Hector and I found myself wondering aloud what happiness meant to me. It made me ask friends and family what happiness meant to them. Read the book and think about that question. You may be just as surprised as Hector as to what you might find!”
— Andy Terrell, Destinations Booksellers, New Albany, IN
View the List

The international bestseller with more than two million copies sold

“Once upon a time there was a young psychiatrist called Hector who was not very satisfied with himself. . . . And so he decided to take a trip around the world, and everywhere he went he would try to understand what made people happy or unhappy.”

Hector travels from Paris to China to Africa to the United States, and along the way he keeps a list of observations about the people he meets. Combining the winsome appeal of The Little Prince with the inspiring philosophy of The Alchemist, Hector’s journey around the world and into the human soul is entertaining, empowering, and smile-inducing—as winning in its optimism as it is wise in its simplicity.

François Lelord has had a successful career as a psychiatrist in France, where he was born, and in the United States, where he did his postdoc (UCLA). He is the co-author of a number of bestselling self-help books and has consulted for companies interested in reducing stress for their employees. He was on a trip to Hong Kong, questioning his personal and professional life, when the Hector character popped into his mind, and he wrote Hector and the Search for Happiness not quite knowing what kind of book he was writing. The huge success of Hector, first in France, then in Germany and other countries, led him to spend more time writing and traveling, and at the height of the SARS epidemic he found himself in Vietnam, where he practiced psychiatry for a French NGO whose profits go toward heart surgery for poor Vietnamese children. While in Vietnam he also met his future wife, Phuong; today they live in Thailand.

Hector’s story is written almost as a bedtime story, from a naïve, childlike perspective. What can the author accomplish from this narrative style that he might not be able to do with a more adult or realistic style?

Many of the people Hector encounters in the developed country where he practices psychiatry are unhappy. What is the cause of their unhappiness?

One of Hector’s earliest discoveries is that comparing one’s self with others is a surefire route to unhappiness, yet throughout his travels he continues to make comparisons—for instance, with the people working in Chinese factories who have not had the opportunity to go to school. Is he better off not thinking this way, or are some comparisons useful?

Globalization is an important theme in this book. What is the connection between globalization and happiness?

The character of Édouard seems to represent a particular type of unhappy person. Do you know anyone like this, and do you think they are capable of finding happiness?

Hector juggles different feelings of love for women in his life. How does his love from Ying Li differ from his love for Clara, and which one is more sustainable over the long term?

Lesson number seven, “It’s a mistake to think that happiness is the goal,” would seem to contradict Hector’s entire quest. How does Hector reconcile this lesson with his continued search for happiness?

What does Hector learn about the role that alcohol, beauty, and sex play in making people happy? Are there dangers to relying on these sources for happiness?

When the boss of the gang in the African country sees Hector’s notebook, he decides to let Hector go. What is it about the notebook that inspires him to do this?

Hector’s journey culminates in a meeting with a professor who researches happiness. Do you think happiness is a worthy subject for academic study, and do you think it’s possible to scientifically quantify it?