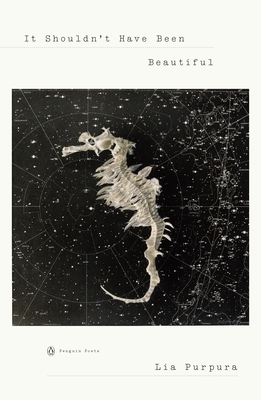 It Shouldn't Have Been Beautiful (Penguin Poets)

Lia Purpura has won national acclaim as both a poet and an essayist. The exquisitely rendered poems in this, her fourth collection, reach back to an early affinity for proverbs and riddles and the proto-poetry found in those forms. Taking on epic subjects—time and memory, metamorphosis and indeterminacy, the complicated nature of beauty, wordless states of being—each poem explores a bright, crisp, singular moment of awareness or shock or revelation.  Purpura reminds us that short poems, never merely brief nor fragmentary, can transcend their size, like small dogs, espresso, a drop of mercury.

Praise For It Shouldn't Have Been Beautiful (Penguin Poets)…

Praise for It Shouldn't Have Been Beautiful:

"In this triking display of minimalist form and content, Purpura employs small and quiet moments to construct a philosophy that embraces the natural world as well as the ambiguities of language and meaning...with an eye for detail and a reverential approach to nature, Purpura deftly distills existential issues to their essence." - Publisher's Weekly

“Compact, profound, bright, occasionally dangerous, Purpura’s sentences shine like amethyst pendants, snap shut like bear traps, and open up underneath like trap doors.  Her phrases demand to be quoted, and they astonish. IF you compare them to watercolors, they are watercolors of granite, of towns on fire. Purpura’s poems tell truths we did not realize were truths. They instruct by evading, and evade by offering tacit instruction: ‘no hope,’ Purpura jokes, ‘just secret/ negotiations with hope taking place.’”—Stephen Burt

“With a zeal for rarity, great tenderness, and a breathtaking ferocity of attention, Purpura zooms in to scrutinize the bittersweet pivot that takes place in us when the world does not meet our desires. These poems are rooted in wonder, in the wide, dislocating pressures of mystery. Purpura shows how ‘beauty persists,’ and can jolt us, sometimes terribly, out of commonplace states. Everything, she suggests, can be disturbed and sprung loose, even grief.  Ultimately, this is a gorgeous, fire-lit meditation on gratitude:  the way gratitude can flow from not-knowing, the way awareness and its powers are endlessly free.”—Joanna Klink

“Lia Purpura's brief poems of direct statement seem to be preceded by a long silence in which the irrelevant and superfluous has been stripped away. But if the poems are distillations, their formulations are not presented as polished conclusions but as definitions-in-progress, subject to change in the interest of truth. The honest openness of their process gives them an impressive authority.”—Carl Dennis

“These poems, simple and compact as seeds, yield pleasures as gigantic and wondrous as sunflowers.”—Mary Ruefle

Lia Purpura is the author of three collections of poems, The Brighter the Veil, Stone Sky Lifting, and King Baby, and three collections of essays, Increase, Rough Likeness, and On Looking, which was a finalist for the National Book Critics Circle Award. She is the recipient of Guggenheim, National Endowment for the Arts, and Fulbright Fellowships as well as three Pushcart prizes, among other honors. Her work appears frequently in The New Yorker, as well as in The Paris Review, Orion, Agni, Best American Essays and other publications. She is writer in residence at the University of Maryland, Baltimore County.
Loading...
or
Not Currently Available for Direct Purchase